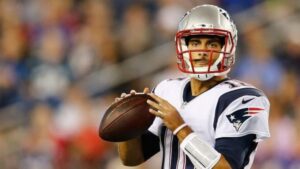 A huge thank you card needs to be written by Robert Kraft and it should be addressed to Jimmy Garoppolo and Jacoby Brissett for keeping their club at the front of the pack. Following the Pats first three wins of the year they are the undisputed Super Bowl favorites through the NFL’s opening weeks. They now take on a so-so Buffalo Bills squad before Tom Brady returns to absolutely demolish the Browns and then some.

The Pats have steamrolled the competition in the opening weeks. Their largest win came just last week when rookie Jacoby Brissett checked in at QB in Jimmy’s injury absence to help them to a 27-0 pounding of the Houston Texans. A Texan bunch, who by the way, had a healthy JJ Watt at the time. Now before we get into the return of Brady, let’s take a look at where New England sits thus far. All NFL sportsbooks listed at this Super Bowl odds guide favor the Pats to continue their winning ways by quite the wide margin.

The Patriots (+375) are listed well ahead of the Green Bay Packers (+800) and Pittsburgh Steelers (+900) to take home yet another Lombardi. Now, while the Pack and Steelers have had decent starts to the year, it’s hard to argue with perfection. Perfection with two backup quarterbacks as well.

Win or lose this week, this Buffalo game will be fairly meaningless for the Pats 2016-17 outcome. All eyes are on the return of Brady from his Deflategate suspension on October 9th in Cleveland. The Browns defence has been the team’s saving grace thus far but even with an above average performance last week in Miami, Cleveland is still 0-3 at the bottom of the league. This game should be an absolute massacre.

Following the Browns tilt, the Pats still have dates with fellow bottom feeders Buffalo (Oct 30), San Francisco (Nov 20), Los Angeles (Dec 4), and Miami (Jan 1). Stock prices for the New England Patriots have nowhere to go but up – even though they’re already on the rise with two backup quarterbacks at the helm.