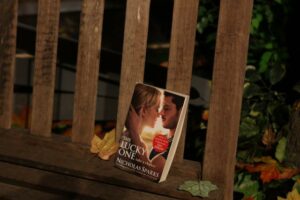 You’ve seen it time and again: best-selling novels adapted for the big screen. Almost no other author has had as many works come to life on film as Nicholas Sparks. But despite directors, writers, and producers having a complete book as a roadmap, not all film adaptations are like watching the book play out on screen. The following is a definitive ranking of 11 Nicholas Sparks books and their corresponding film adaptations:

This classic tale of high school sweethearts who were each other’s “one that got away,” is one of Sparks’ more recent novels. In addition to being the second lowest-grossing Sparksian film adaptation and the recipient of the poorest critic reception, the film was fundamentally different from the book. The times, settings, and characters are very different in the film than they are in the book, which left many viewers disappointed.

The most recent adaptation of a Sparks novel is the lowest-grossing of his films, despite being based on a No.1 New York Times bestseller. While the film stays somewhat true to the book, neither the film, nor the novel, were up to the expected Nicholas Sparks caliber. Both the film and the book seem to drag on too long and the story of Travis and Gabby, and their on-screen characterizations, left much to be desired.

One of Sparks’ only stories not about twenty-somethings, Nights in Rodanthe reminded audiences that love is possible at any age. At age 45, Adrienne Willis retreats to the small beach town of Rodanthe, North Carolina to tend to her friend’s inn after her husband leaves her for a younger woman. While there, she meets the Inn’s only guest, Jack, a man coping with his own estranged family, and the two wait out a storm together. Though this is not the worst of Sparks’ film adaptation, the movie certainly strays from the book.

In the film, Katie and Alex’s love story stays pretty true to that of the novel. In this tale of bravery and heartache, Nicholas Sparks takes his writing down a dark path as Katie flees an abusive relationship with the help of small-town locals and a new love interest, Alex. The film, however, does not go into as much depth about Katie’s past and the tumultuous relationship she fled.

If you’re looking for a tear-jerker, this film adaptation sure does the trick. Nicholas Sparks’ 17th romance novel follows the budding romance of Sophia, a Wake Forest college student, and Luke, a cowboy and daring bull-rider, while simultaneously recounting the love story of Ira Levinson and his late wife, Ruth. The film and novel pay homage to Black Mountain College, a liberal arts school that was a fixture in the modern art movement. Overall, the film didn’t exactly keep with the novel, but did provide a uniquely wonderful twist on the book.

The showmance-turned-romance heard ‘round the world started on set of this Sparks film adaptation. When Ronnie (Miley Cyrus) is sent to the Atlantic Coast of Georgia to spend the summer with her estranged father, with whom she reconnects over their mutual love of music. While in Georgia, Ronnie meets Will (Liam Hemsworth), and the two proceed to fall in love. The film followed the plot of the novel closely, making it the ideal film adaptation.

Sparks’ first novel-turned-film is a fan-favorite. The story of Theresa, a divorced mother of a 12-year-old son, and Garrett, a man grieving lost love, whose paths cross after Theresa finds a letter Garrett wrote: “My Dearest Catherine, I miss you my darling, as I always do, but today is particularly hard because the ocean has been singing to me, and the song is that of our life together.” This fateful letter and the story surrounding it are sure to get your tears flowing.

The love story of Jamie, the local minister’s daughter who was diagnosed with leukemia, and Landon, the neighborhood rebel, is one for the ages. This also may be the only film adaptation that fans enjoy more than the novel, many commenting on the portrayal of Landon by Shane West and the depth of the relationship between him and Jamie being further developed in the film.

Sparks’ fourth-highest-grossing film, adapted from the 2008 novel of the same name, is quite different from his novel. Character names are changed and events omitted or invented. In “The Lucky One,” Zac Efron plays Logan, a young Iraq war veteran who believes a picture of a woman he does not know will be his good luck charm and prevent him from dying in battle. Upon returning to the States, Logan searches for the unknown woman who served as his guardian angel.

John Tyree, a military man reflects on his love with Savannah Curtis in this Sparks story. Tackling issues like mental health, developmental disabilities, and long-distance relationships, Dear John is one of the more realistic Sparks tales. The movie received a relatively positive critical response and is Nicholas Sparks third-highest-grossing film.

This truly magical book translated on-screen to a timeless classic. Nicholas Sparks’ first published novel introduced the world to the love story of Noah and Allie, a 1940s Romeo and Juliette of sorts plagued by classism and poor timing. While the novel and film differ slightly, this is by far the best film based on a Nicholas Sparks novel.

Regardless of which one you love most, we can all agree that Nicholas Sparks has gifted the world countless tear-jerking love stories and will likely continue to do so for years to come.

The Future Marketing Concept You Can’t Ignore, And How to Do It