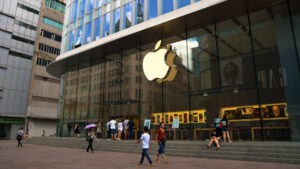 Apple could soon change the way its retail Apple Stores look, wherever they are present. The company has worked its way to redesign, rebrand and give its store an overall makeover.

Apple, which launched its 10th location in New York and named it Apple World Trade Center, dropped the word ‘Store’ from its name. The tech-giant is reportedly simplifying the branding of its retail chain by getting rid of the word.

According to reports, the company has informed all its retail staff and in addition to the physical store, the re-branding has been confirmed for their online edition as well. The re-branding is already reflected on every website for Apple’s various stores.

Apple stores, with fancy headphone setups and avenue displays will now change on a seasonal basis to showcase different products.

So, what’s up next? Will the iPhone 7 just be called Banana?