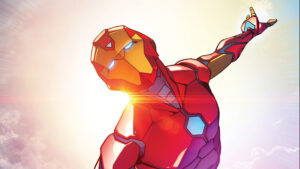 Marvel Studios has finally decided on a name for Ironman’s successor – Ironheart. In the comic book series, Tony Stark, the genius, billionaire, playboy, philanthropist steps out of the armour and an MIT graduate, Riri Williams, takes his place with her own self-made suit.

Following the events in Civil War Two, Williams builds her own suit and upgrades it later with the help of Stark himself. The creators did mention that this is not a spoiler to what happens in Civil War Two.

Writer Brian Michael Bendis and artist Stefano Caselli have created Ironheart not just as a new character but a replacement of Ironman himself.

Williams, apparently a genius like Stark, is only 15 when she enrolls in MIT. She reverse engineers an Ironman suit to make her own armor, in her dorm room! She first comes to Tony Stark’s attention when James Rhodes spots her doing a test flight and Stark decides to help her with her armor suit. Although he won’t be seen in his armor anymore, to keep Tony Stark a part of future stories, Ironheart’s AI companion will be based on Tony Stark’s personallity.

Her being an Afro-American young women did cause a little turmoil in the fan community but that is no big surprise, fans generally don’t like changes especially not such drastic ones, from billionaire playboy to teenage female geek.

There were discussions on how to name the new hero(ine) and naturally Ironwoman was an option but then not really, too old fashioned. When asked about how the name came into existence, Bendis told Wired:

Tony (Stark) first put on the armor to save his heart. Riri puts it on for different reasons altogether but still heart-related.

We’ll know more when the new Invicible Ironman comic comes out this fall.

(With inputs form Marvel and Wired)

Why Great Content Is a Must For ECommerce Blogs