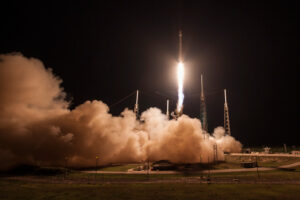 For the second time ever, Elon Musk’s SpaceX on Monday has landed one of its Falcon 9 rockets on land. This comes after another such successful ground landing in December. This also marks the fifth rocket the company has landed successfully.

The latest launch has been in contrast to recent launches which have attempted to land the Falcon 9 on drone ships at sea.

The Falcon 9 carried with itself the Dragon capsule bound for the International Space Station (ISS) with 5,000 pounds of supplies, equipment and a docking adaptor for future manned missions to the outpost. This launch from Cape Canaveral Air Force Station, Florida is the latest in the chain of commercial supply missions that Elon Musk’s SpaceX has carried out for for NASA. It is the ninth of up to 20 missions to the International Space Station that SpaceX will fly for NASA in the coming months. According to the information provided by SpaceX, the first stage of the rocket landed back at Cape Canaveral around the same time as the Dragon capsule successfully separated from the second stage of the Falcon 9.

SpaceX has lofty plans to bring to reality a working space program which uses reusable rockets. The eventual goal is to reuse rocket bodies for multiple spaceflights, greatly reducing the costs incurred on future space-bound missions.

Currently, rockets are discarded after launching one payload to space, but if reusable boosters become a reality, companies that hope to get their cargo to space will only need to pay for the cost of the spacecraft (such as the Dragon capsule) and the fuel for launch, without incurring the costs of the rocket itself.

Now Pokemon Go Has Its Own Song