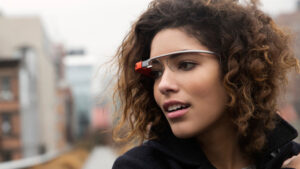 IBM has patented an eyewear like Google Glass that will have red-eyed night vision capabilities,as per media reports.

However, the not-so-night-vision eyewear claims to improve sight under low light bytricking the brain to focus on high contrast imagery.

“IBM’s Google Glass modifications include a sensor and ‘a comparator device’ designed to detect and contrast lightintensity. When the light intensity drops below a set level, a pair of projectors – one for each eye – bathe theuser’s eyes in red light,”

The patent claims the effect is similar to that of dark rooms used in photography or the red-tinted glasses worn bysome airline pilots.

When the user enters a low-light environment, the projector automatically projects a low-level red light in toeach eye of the user.

Shining red light directly into the eyes creates the same response rods as casting red light onto an environment.Which means it tricks the rod cells into sending higher contrast images to the brain.

However, the company also issued a health warning, stating that gadgets like Google Glass may not be safe to wear.

Benjamin the Bot Wrote The Script for ‘Sunspring’

Behind GoT’s Battle of the Bastards Scene