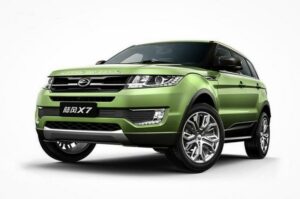 Despite their strikingly similar designs, the Evoque costs three times the price of Jiangling’s Landwind.

Jaguar, which is owned by India’s Tata Motors, said in a statement that a court in Beijing served Jiangling with newly filed actions surrounding copyright and unfair competition.

Landwind unveiled a new version of its X7 SUV in November 2014, drawing criticism for its striking likeness to the Evoque, an imported version of which was already on sale in China.

The two SUVs have a similar shape, with the roof and windows tapering from front to back, and near identical tail lights and character lines on the side panelling.

JLR and Jiangling have agreed that Landwind will not sell the X7 in Brazil and are also discussing X7 design updates.

A lawsuit will be a long-drawn process, which is why foreign automakers prefer to stay away from legal action in China as they feel the odds of winning against local firms are low.

"i" Next is BMW’s New Self-Driving Car Devision