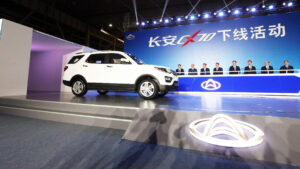 SUV sales topped 6 million in China last year, a jump of more than 50 percent in an overall market that grew less than 5 percent, as drivers sought more room for their money. As China’s economy weakens, price-conscious drivers have shifted from foreign brands to cheaper domestic SUVs.

To make the sale, many automakers and dealers only offer ESC as an extra, more expensive, option. Among the 10 best-selling SUVs in China last year, seven did not have ESC as a standard feature.

SUVs have a higher centre of gravity putting them more at risk of rolling over. ESC counteracts that, quickly reorienting a skidding vehicle to stop it from rolling. A study published by Annals of Advances in Automotive Medicine found vehicles with ESC are two-thirds less likely to flip.

There is no legal requirement in China for ESC, and German parts maker Bosch says 43 percent of SUVs do not come equipped with this technology.

In 2007, following a series of SUV rollovers, the United States ordered ESC to be compulsory in all passenger vehicles. The US National Highway Traffic Safety Administration (NHSTA) estimated the move saved more than 2,200 lives over a three year period.

China’s Ministry of Transportation and the Ministry of Industry and Information Technology, generally responsible for regulating the autos industry, did not respond to faxed questions about whether there are plans to make ESC compulsory.