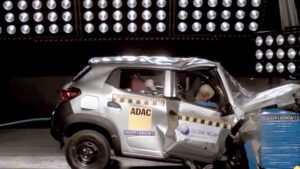 According to theEconomic Times, Secretary General of Global NCAP, David Ward expressed his concerns about the worrying conditions of the cars which were tested.

David Ward, Secretary General, Global NCAPThe latest SaferCarsforIndia results show how important it is for cars to have a body shell that can remain stable in a crash. This is an absolutely crucial pre-requisite for occupant safety together with fitment at least of front air bags. Global NCAP strongly believes that no manufacturer  anywhere in the world should be developing new models that are so clearly sub-standard. Car makers must ensure that their new models pass the UN’s minimum crash test regulations, and support use of an airbag.

The Economic Times reported that all five cars tested by the agency fared extremely poorly, the statistics are worrying for car owners around the country.

The collapse of the structure in the passenger compartment and the lack of airbags were the main causes for concerns which led to the abysmal result.

Following safety improvements Renault proposed that Global NCAP test an updated evolution of the Kwid in production from early April 2016. The car was tested with and without an airbag.

The new Kwid had little improvement to show except in child occupant protection for which it was rated with a below average two stars.

The ‘improved’ version only had a reinforced driver’s side with minimal protection for passengers.

Renault has confirmed that they will implement further improvements to the Kwid and Global NCAP will test these new evolutions in forthcoming crash tests.

It was concluded that in the event of a crash, there is a high probability of the occupants receiving life threatening injuries. This is due to the collapse of the unstable structure combined with the lack of airbags.

It was zero stars for the non airbag Eeco due t the collapse of the structure and lack of airbags. It did not fare well in the child occupant protection either, clinching only one star.

Due to the structural collapse, the addition of airbags will not help the car amp up its safety in anyway.

The poor result was evidently due to the lack of airbags, as with the previous cars.

The launch of a Bharat New Car Assessment Programme is heavily anticipated with hoped that it can help build a market for safer cars in India.

The NCAP Secretary also emphasized the importance of manufacturers being pro-active and eliminating all zero star cars from production without waiting for legislation to execute rules.

Motorola Moto G4 Plus Gets the 16MP Camera We Always Wanted