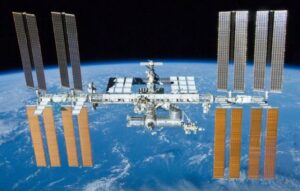 After nearly 18 years in orbit the International Space Station (ISS) has completed its 100,000th orbit around the Earth.

The ISS was built with the collaboration of 16 countries – US, Canada, Japan, Russia, Brazil, Belgium, Denmark, France, Germany, Italy, the Netherlands, Norway, Spain, Sweden, Switzerland and the UK. It has harbored astronauts from 18 different countries, continuously, for some 15 and a half years.

Since its launch in 1998, the ISS has travelled a whopping 2.6 billion miles, that is equivalent to travelling to Mars and back ten times, or nearly a trip to Neptune.

The space station, and its inhabitants, have witnessed a lot over the years, mega storms, volcanic eruptions, floods and fires and unfortunately a lot of wars. The bright side is that you can see a sunrise or sunset every 45 minutes on the ISS, and some people even believe that you can occasionally sight an alien spaceship flying by.

Flying around the Earth is not only sunsets and aliens, it’s hard work for the astronauts and there are dangers. The space station has had to deal with several maintenance issues that could of even forced the crew to abandon the station if they had not been resolved, here are a few

Not to forget the recent crack in the window

But despite all the dangers in space and changes down here, the space station is still orbiting the Earth and will hopefully continue to do so for lots of years to come.

Sponsored – Online Gambling: How It Works?