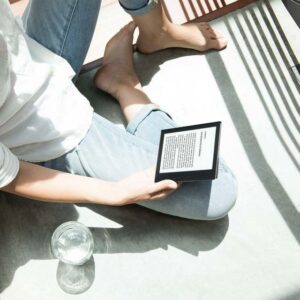 There used to be a time when you couldn’t get a self-respecting bookworm to part with his paperback. But today, even the most hardenedof the lot have switched over to ebook readers thanks to the sheer convenience of carrying your entire library with you everywhere you go. And Amazon has led the charge in this space, consistently delivering the best ebook reading experience over the years.

With the latest Kindle Oasis though, Amazon’s turned the page on design, usability and probably more crucially, on pricing. Is thenearly $300 Oasis worth the money? I went on a binge reading session over the past couple of weeks to answer justthat.

The most expensive Kindle e-reader from Amazon to date. (Photo:The Quint)

The Kindle Oasis is a radical design departure from the Kindles we’ve grown to love, yet it retains pretty much all the elements thatmake Kindles the best reading devices around.

Gone are the slab-like designs of yore, replaced by a wedge of a device that’s amere 3.4mm at its slimmest point – to put it in perspective, that’s half the thickness of most regular phones these days. It is,without a doubt, the most premium, unadulterated reading experience that money can buy.

Amazon’s radical design choices pay off well with the Oasis – it’s the first e-book reader that’s specifically designed keeping single-handed reading in mind. From the shorter squarish shape to the weight to the physical page turning buttons on the “spine”, the Oasisfeels balanced and natural in your hands just like a real book.

The accelerometer ensures that lefties aren’t left out in the cold.In the hand, the plastic polymer frame is electroplated with a metal layer, which ensures that even while the Oasis feels thin andfragile, it doesn’t bend or flex at all.

The e-ink display on the Kindle has done them wonders. (Photo: Amazon)

We’d even go so far as to say this is the first e-book reader that completely nails thedesirability quotient, which is pretty crucial if you want to charge that not-so-insignificant pricing!

To keep the Oasis this thin, Amazon slimmed out the battery which still manages to last several weeks depending on your reading pattern.Snap on the included magnetically attaching smart case, which comes in a rich leathery finish, and you get well over a month’s use withthe case’s built-in battery.

It’s a high-quality accessory and only adds another 100 grams or so to the weight, so you’d betempted to leave it on all the time!

On paper, the Oasis’ 6-inch e-ink display with 300ppi resolution looks to be no different than the current generation Paperwhite andthe Voyage, but in the Oasis, the LED backlight lights up the screen from multiple sides, making for more even lighting that’s also atad brighter than before.

With the carefully considered design on the Oasis, Amazon missed a trick in not waterproofing its most premium Kindle, so you’re stillnot going to be able to take your Kindle to the pool or bathtub. This could have been a big differentiator from the restof the lineup.

The other big regression is the lack of the ambient light sensor we saw on the Kindle Voyage, which means that brightness of the displaycan’t be adjusted automatically when you move from indoors to outdoors.

Probably the biggest criticism of the Oasis is also a testament to how refined and mature the entire Kindle lineup is, and that is thefact that while you get a fancy new design with the Oasis, the core reading experience remains largely unchanged and there are no standoutnew features.

It’s the same version of the Kindle software that runs on the other Kindles, you go to the same Amazon store to downloadbooks, and the screen, with all the extra lighting, isn’t fundamentally that much better.

The Oasis is Amazon going all out to make the e-reader get out of the way of the e-book reading experience, with the featherweight design,considerably more intuitive physical controls and an unmatched premium in-hand feel.

Is it worth the upgrade?

Maybe to the niche or affluent, frequent-flying, compromise-at-nothing readers who place a serious premium on their readingexperience and will not compromise on a less desirable, significantly cheaper and mildly dated-in-comparison alternative a la thePaperwhite.

But for the most of us, the Paperwhite is what you need, while the Oasis will remain the Kindle you’ll secretly want.

(Tushar Kanwar is a technology columnist and commentator and has been contributing for the past 15 years to leading newspapers and magazines. He can be reached on Twitter: @2shar.)

Affordable LED TVs: All You Need to Know Before Buying One