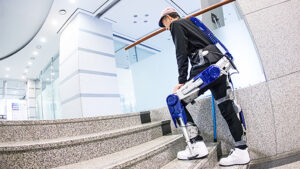 This wearable robot that we are developing for commercial purposes will be used in diverse areas.

Such a robot development is in line with Hyundai Motor Group’s vision for free mobility of people and things.

The robot is like the suit seen in the Hollywood blockbuster “Iron Man”,which one can wear by simply buckling into it, as per media reports.

The wearable robot under development is known to help the controller by enhancing overall physical strength, making it possible to lift an object weighing over 60 kg and assist him or her walk and go up stairs.

It can be used in assisting people with disabilities and the elderly to walk and engage in diverse activities, the official added.

Uber’s Chinese Rival Didi is Worth Apple a Billion Dollars