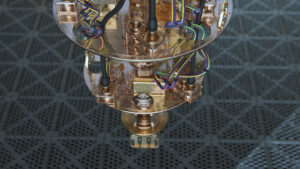 Quantum theory has proven to be the building block for many of the major technological advances of the 20th century. This mathematical theory has found its uses in modern day science and has helped expand our understanding of the confusing world of sub-atomic particles.

It has given birth to lasers, and fiber optics, both technologies, that have changed our lives forever, and if IBM has its way, backedby Quantum theory, computing as we know will soon be revolutionised forever.

US-based tech giant, IBM, has launched a new cloud computing service that is powered by a five-bit quantum computer housed in Yorktown, New York. This is the first ever publicly accessible quantum computer which uses superconducting quantum interference devices as qubits to process 1s and 0s at the same time, hence speeding up the computing process significantly.

Though quantum computing has been on the horizon for quite some time now, it has still failed to make a major impact because of its unstable behaviour and poor thermals at the hardware end, both issues which IBM seems to have fixed with its new offering hinting at a possible maturing of the technology.

Arvind Krishna, Director, IBM ResearchQuantum computing is becoming a reality and it will extend computation far beyond what is imaginable with today’s computers. By giving hands-on access to IBM’s experimental quantum systems, the IBM Quantum Experience will make it easier for researchers and the scientific community to accelerate innovations in the quantum field, and help discover new applications for this technology.

Implications of IBM’s fancy new quantum systems being made available to the general public could result in making breakthroughs in Artificial Intelligence, research, and heavy computing closer than ever. It will make the process of decoding DNA sequences faster, and help solve a host of problems that were too difficult to handle because of the bottlenecks of the older generation binary computing.

If you find yourself interested, register here to try this cool technology.

Which actors will be moonlighting as directors this year