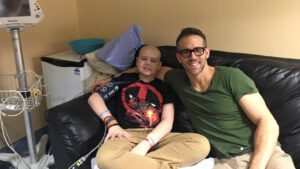 Reynolds had been visiting Connor of Edmonton in Alberta, Canada for the past three years through the Make-A-Wishfoundation after he was diagnosed with high-risk acute lymphoblastic leukemia.

Connor’s favourite superhero was Deadpool and both of them bonded over their love for the character.

Excerpt from the open letterWe met because he loved Deadpool. In a certain sense, he WAS Deadpool. Or, at least everything Deadpool aspires to be; balancing pain, fearlessness, love and a filthy (filthy!) sense of humor in one body. I wish he could’ve stuck around a lot longer.

Reynolds even travelled up to Alberta to surprise Connor with a rough cut version of Deadpool. For those of you who have seen the movie, you know it has a lot of swearing and so, Reynolds promptly added a disclaimer in his emotional goodbye letter.

***Before you jump down my throat for showing a 13 year old an R-Rated film, please know this kid knew more swear words than a British chef.

A still from Deadpool. (Photo: AP)

I’m grateful I got to orbit Connor’s world for a brief time. Grateful for the pages and pages of hilarious texts between us. Grateful to his parents for allowing Connor to spend time with a foul-mouthed child in the body of a 39-year-old.

Reynolds shared a link for people to donate to the Make-A-Wish Foundation.

I can pretty much guarantee, your money’s going to a damn good place. These people do not suck. They are heroic. Full stop.

He ended by conveying his condolences to the parents and everyone who loved Connor.

Excerpt from the open letterMy deepest condolences and thanks to Kim, Gerald and the entire clan McGrath—who loved this little boy so very well. And thankfully, Connor knew it.

Don’t Be A Victim: Defending Against Ransomware