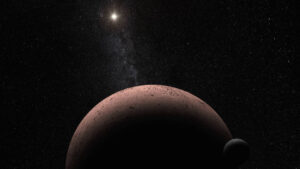 Chalk up a moon for the icy dwarf planet Makemake.

The Hubble Space Telescope has detected a tiny, dark moon circling the dwarf planet on the frozen fringes of our solar system. On Tuesday, scientists announced the discovery by some members of the team that spotted Pluto’s smaller moons years ago.

Makemake itself is just 870 miles wide. Its moon – dubbed MK2 – is a mere 100 miles across and more than 1,300 times fainter with its black surface. Makemake is named after the creation deity in the Rapa Nui mythology of Easter Island.

Hubble’s wide-field camera made the observations last April, spotting MK2 13,000 miles from Makemake. Previous searches were unsuccessful because of the glare from Makemake. Further observations will be needed to determine if MK2’s orbit is circular or oval.

Scientists said the discovery is further evidence that most dwarf planets way out in the Kuiper Belt – well beyond the orbit of Neptune – do, indeed, seem to have moons. MK2 will allow researchers to study Makemake in even greater detail, said Alex Parker of the Southwest Research Institute in Boulder, Colorado, who led the image analyses.

It is a very exciting discovery! It means that Makemake is no longer the odd-one-out in the moon-hosting Kuiper Belt dwarf planet club, and it means that we can do detailed studies of the mass and density of Makemake that would have been impossible without the moon.

Makemake is second to Pluto in brightness among the dwarf planets known to inhabit the Kuiper Belt.

Investigators Believe that Prince May Have Died Due to an Overdose