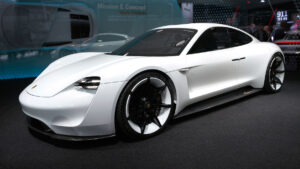 The automotive and tech companies pursuing the driverless car share a utopian belief: Autonomous vehicles will benefit society, eventually saving most of the nearly 33,000 people killed each year in road accidents in America alone.

If the situation was reversed, and we had automated vehicles today and someone proposed to let people drive cars, what would the reaction be? You would be basically asking that 33,000 deaths per year be allowed on highways as part of a policy plan. There’s no way on earth anybody would accept it.

The big win for society wouldn’t be big, or even a win, for everybody, however. There will be losers and winners.

Take automakers. Eventually, if fully driverless cars can be summoned with a smartphone just like Uber cars today, many people might forgo car ownership. Or families in developed nations might own one car instead of two.

For example, if driverless cars catch on in the US, car sales could plunge 40% in the next 25 years, Barclays analyst Brian Johnson wrote in a report last year. General Motors and Ford Motor Co, he added, would have to cut their combined number of assembly plants in the US and Canada to 17 from the current 30. Some 25,000 auto workers would lose their jobs.

Automakers now are moving to offset any loss of sales with revenue from providing transportation as a service.

As the cost goes down for autonomous vehicles, it will allow people who cannot drive – the elderly and disabled – to own or use vehicles, Abelson said, echoing comments by Google executives.

Some automakers already are experimenting with selling rides as well as cars. Ford and Jaguar Land Rover are launching car-sharing experiments without self-driving cars; autonomous vehicles could accelerate the concept. General Motors has purchased 10% of ride-hailing service Lyft, a competitor to Uber.

But a prolonged transition to full autonomy could bring automakers a financial windfall. The stage before fully autonomous cars become a reality, is technology which requires some human intervention – including automatic handling in traffic jams, braking to avoid accidents, keeping a proper distance from cars ahead and pulling into parking places. These features would cost extra and boost profits, especially on luxury models.

This is already happening. Last year, Tesla Motors Inc introduced Autopilot, which does all those things, on its Model S that starts at $76,500. Drivers are warned to keep their hands on the wheel – not that they always comply.

The Mercedes-Benz Intelligent Drive system, offered on the new E-Class and some other models, includes features the Daimler AG brand calls Park Pilot, Speed Limit Pilot and Blind Spot Assist. Other automakers are joining in.

The components companies that sell these systems to automakers are already winners,whereas in the future, Google parent Alphabet Inc and Apple Inc, could be big winners.

Google, which says it wants automotive partners, could licence its self-driving software to car companies worldwide. Apple, typically tight-lipped, won’t discuss its automotive ambitions. It’s hiring suggests it might want to market Apple-brand cars, though their manufacture might be out-sourced, like iPads and iPhones.

Google’s self-driving Lexus car drives along street during a demonstration at Google campus on in Mountain View, California. (Photo: AP)

People who drive taxis, Uber cars, transit buses or delivery trucks would be losers. The number of jobs lost in the US alone could total 2.6 million, or nearly 2% of the workforce, calculates economist Martin Zimmerman at the University of Michigan.

Eventually, widespread adoption of autonomous driving and automated accident-avoidance technology could undermine automobile insurers. The collapse of auto-insurance premiums in America and Europe as autonomous cars take hold would create a “giant, sucking sound,” Kate Brown, senior vice president of Swiss Re, told a recent conference on autonomous driving at the University of Michigan law school. Insurers would “make it up in China and India” and other emerging markets, she said.

Auto insurers could profit by delaying big discounts for customers who buy automated driving technology, arguing it will take years of claims experience to know how many accidents and deaths are avoided.

Trial lawyers can probably breathe easy: Autonomous driving won’t end litigation over accidents. But it will change who gets sued.

A greater share of crashes could be attributed to a product defect.

In other words, when cars drive themselves, manufacturers – as opposed to human drivers – would be liable.

Apple’s iPhone Sales Are Down; Company Loses Big Money in 2015-16

Make Your Own Automobile Fuel With Used Cooking Oil