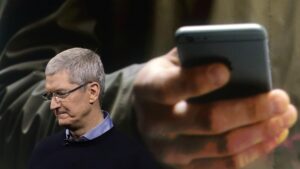 It’s happening. Apple says quarterly revenue fell for the first time in more than a decade, as iPhone sales fell comparedwith a year ago. That’s putting more pressure on the world’s most valuable public company to come upwith its next big product.

Apple sold more than 51.2 million iPhones in the first three months of 2016 — while racking up $10.5 billion in quarterly profit.

That was more than many analysts expected but still fewer than the 61 millioniPhones sold a year earlier.

The company is battling perceptions that its latest iPhones aren’t dramatically different from previousmodels, as overall smartphone sales are slowing around the world. Apple also sells iPads, Mac computersand other gadgets, but nearly two-thirds of its $50.6 billion in quarterly revenue came from iPhones.

Also Read: Five Reasons Not to Buy the Apple iPhone SE for Rs 39,000 in India

Revenue was down 13 percent from the January-March quarter of 2015. And the company surprisedanalysts by forecasting another revenue drop of 13 percent or more in the current quarter. The forecastdrove Apple’s stock price down more than 5 percent in extended trading Tuesday, after closing at $104.35.

Despite the decline, Chief Financial Officer Luca Maestri said in an interview, “we continue to believe the iPhone business is very strong.”

But he added that Apple is expanding its other businesses. The January-March quarter includes $6 billion in revenue from online services, apps and other software, which was up 20 percent from a year earlier, but just 10 percent of overall revenue.

“They need to come out with that next great product,” Angelo Zino, a financial analyst with S&P Global Market Intelligence, said in an interview before Apple released its earnings report.

While he’s optimistic about the company’s future, Zino added, “Apple absolutely needs to start diversifying their revenue base.”

What Makes The ‘Perfect’ Leader?

Sure, Driverless Cars Might Save Lives but Will Kill Businesses