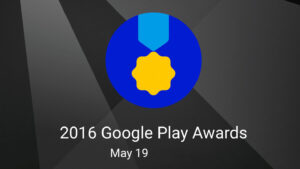 Giving where the credit is due, Google has announced its first-ever Google Play Awards to be held this year. This landmark event has been designed to thank millions of developers who have made the Android ecosystem a big success across the globe.

The award ceremony will be organized at the Google I/O 2016 which is slated to take place from May 18 onwards. The Google Play Award winners will be announced on 19 May, as informed by Google.

Google BlogpostGoogle Play has seen tremendous growth over the past year, reaching more than 1 billion Android users across 190 countries. As a way to recognize our incredible developer community and highlight some of the best apps and games, we’re kicking off our first-ever Google Play Awards.

Google’s Android and Apple’s iOS are the biggest mobile ecosystem in the market right now with the likes of Windows Phone and BlackBerry OS losing their sight over the years.

The popularity of the operating system (OS) has ensured that Google continues to hold the leadership position with over 85 percent smartphones used across the globe running on Android. With Google Play Awards, the developers will get more incentives to continue their affiliation with Google and Android at the same time.

Google BlogpostThe program will showcase five nominees across 10 award categories and feature them in a dedicated collection on Google Play.

These are the categories set up for the Google Play Awards 2016:

Arcade look is out, live dealers are the new trend for online casinos

The Inside Story of Meryl Streep’s Tragic Love & Loss