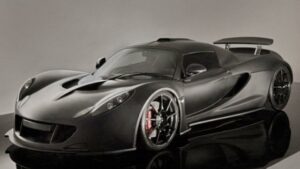 The record for the fastest convertible was held by Bugatti’s Veyron Super Sport Vitesse, which it achieved by going at a speed of 254 mph (408.7 km/h). That record has been broken by the Hennessy Venom GT Spyder, which obtained a top speed of 265.6 mph (427.4 km/h) at Lemoore Naval Air Station in California.

The car was driven by Brian Smith, director of the Ford Performance Racing School.

The Hennessy Venom GT Spyder is powered by a twin-turbo 7-litre V8 engine that produces 1,451 horsepower 1,745 Nm of torque.

The car comes with a 6-speed manual gearbox and the power is delivered to the rear wheels.

Henessy Venom GT from the back. (Photo Courtesy: Venom GT)

The price? A whopping $1.3 million each, plus tax

Will the tattoos of the future be nano-screens on our skin?