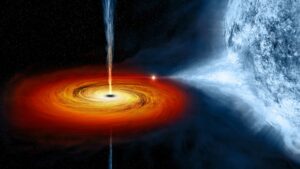 Astronomers from NASA’s Hubble Space Telescope and the Gemini Telescope in Hawaii have uncovered a supermassive black hole in an unlikely location, indicating that these monster objects may be more common than once thought.

The near-record breaking black hole, weighing 17 billion suns, was discovered in the centre of a galaxy, in a sparsely populated area of the universe.

“The newly discovered supersized black hole resides in the centre of a massive elliptical galaxy, NGC 1600, located in a cosmic backwater, a small grouping of 20 or so galaxies,” said lead discoverer Chung-Pei Ma, professor at University of California-Berkeley in US.

The black hole, located about 200 million light-years from Earth, is 10 times more massive than it was predicted for a galaxy of this mass, the researchers explained in the journal, Nature.

Until now the biggest supermassive black holes have been found in the core of very large galaxies in parts of the universe packed with other large galaxies. The current record holder weighs 21 billion suns and is located in the Coma galaxy cluster that consists of over 1,000 galaxies.

NGC 1600, the dominant galaxy in its galactic group, is, at least, three times brighter than its neighbours.

Most of the galaxy’s gas was consumed long ago when the black hole blazed as a brilliant quasar from material streaming into it that was heated into glowing plasma.

“Now, the black hole is a sleeping giant,” Ma said, adding, “the only way we found it was by measuring the velocities of stars near it, which are strongly influenced by the gravity of the black hole. The velocity measurements give us an estimate of the black hole’s mass.”

The velocity measurements were made by the Gemini Multi-Object Spectrograph (GMOS) on the Gemini North 8-metre telescope on Mauna Kea in Hawaii.

Are You Crazy About Posting Selfies? You May be a Narcissist

Robots Are Coming! Chill, It’s Only to Deliver the Post in Germany