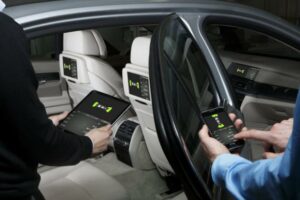 Cars are getting smarter, safer and greener with every passing year. They are metal bubbles containing the latest technological innovations, from advanced 360-view cameras to integrated, connected ‘infotainment’ systems controlled by your smartphone. What will cars be like in 2020? Here are a few educated guesses.

Keys will be a thing of the past

At CES 2015 in Las Vegas, Audi showed off a smartwatch widget that allowed you to unlock your car. It’s based on Radio Frequency Identification, which has been the centre of security concerns, but like internet banking the tech’s privacy will be shored up in the coming years. It could even be extended to encompass your house, garage and office keys, too.

Cars will drive themselves – in certain circumstances

It’s going to take more than four years for cars to be able to reliably drive themselves at all times. But we’ll be able to hand over more and more control. Think of driving on relatively quiet country roads on a fine day – the perfect situation for driverless cars. The fewer variables there are on the road, the better equipped driverless AI is to transport you safely, as this Guardian feature illustrates.

Forbes.com reports that Ford has developed a system which turns seatbelts and steering wheels into sensors that track your vital signs, although the advances made in wearable technology over the just the last couple of years means that your car could just synch with your jacket instead. If you were unfortunate enough to suffer a heart attack while behind the wheel, the car would pull over and alert emergency services.

Some cars already know when to brake, something that’s especially helpful in snowy or rainy weather. But what about a car that brakes even if you have your foot on the accelerator? If your car spots a potential hazard that you have missed, it will slow down regardless of which pedal your foot is pressing. Intelligent windscreen displays could even point out the danger spot ahead. Speaking of which…

Head-Up Display systems were developed for the military decades ago, allowing pilots to see vital information projected first onto a screen and subsequently onto their visor. The tech has since made its way into some cars in limited form. By 2020, active glass will display sharp images such as upcoming traffic signs and even sat-nav directions.

Helicopter footage of high-speed police chases is on the way out. Telematics firm OnStar already leverages remote shutdown tech that switches off a car’s engine if it has been stolen. In a few years the system will be even more responsive so that a stolen car will barely have moved before shutting down – biometric sensors will detect whether or not the rightful owner is behind the wheel.

Yes, this exists via commercial radio. But with more cars being connected to the internet, you’ll soon have the pleasure of more closely targeted advertising coming your way. Driving towards a favourite restaurant? You might hear about lunch offers. Concert venue coming up? You’ll get details of your most listened-to artists’ tours.

The Dark Tetrad Of Trolling Traits: Are You A Troll?