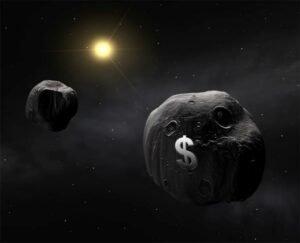 With numerous private companies joining the space race, competing with government backed agencies, it will only be a matter of time before we see the first commercial space flights. Alongside the more famous names like SpaceX and Virgin Galactic, who are primarily focusing on recreational flights, there are others who want to exploit the abundant resources that are flying around in space. And where there is money to be made, there is competition, and where there is competition you need rules and regulations.

Back in the sixties, when space flight first became reality, the nations of the world came together to regulate what happens beyond our stratosphere. The result was the Outer Space Treaty of 1967, a “Treaty on principles governing the activities of states in the exploration and use of outer space, including the moon and other celestial bodies. “, all in the good spirit of the Charter of the United Nations.

If you look at the opening paragraphs of the treaty, you will notice the language used reflected the view of seeing mankind as a unit and outer space something that has yet to be explored. It is evident that at that time governments were more concerned about scientific progress and not having nuclear weapons flying around space, than mining rights or commercialising the moon.

THE STATES PARTIES. TO THIS TREATY,

INSPIRED by the great prospects opening up before mankind as a result of man’s entry into outer space,

RECOGNIZING the common interest of all mankind in the progress of the exploration and use of outer space for peaceful purposes,

BELIEVING that the exploration and use of outer space should be carried on for the benefit of all peoples irrespective of the degree of their economic or scientific development,

DESIRING to contribute to broad international cooperation in the scientific as well as the legal aspects of the exploration and use of outer space for peaceful purposes,

BELIEVING that such co-operation will contribute to the development of mutual understanding and to the strengthening of friendly relations between States and peoples,

The treaty consists of 17 articles that built a framework for international cooperation in space, stressing that all nations should profit from the benefits and achievements of space travel. Here are a few highlights.

“The exploration and use of outer space, including the moon and other celestial bodies, shall be carried out for the benefit and in the interests of all countries, irrespective of their degree of economic or scientific development, and shall be the province of all mankind.“

“States Parties to the Treaty shall regard astronauts as envoys of mankind in outer space and shall render to them all possible assistance..”

And they made it a point that they don’t want any nukes stationed up in the sky.

“States Parties to the Treaty undertake not to place in orbit around the earth any objects carrying nuclear weapons or any other kinds of weapons of mass destruction, install such weapons on celestial bodies, or station such weapons in outer space in any other manner.”

The nations of the world made it clear that space is different than Earth, it is there for mankind and not for a specific nation. It was the era of Star Trek, science fiction showed a future without nations and wars for resources, people visioned a bright future of interstellar exploration in perfect harmony. But space travel didn’t develop as many had hoped, and nearly sixty years later there are still no colonies on the moon or mars, just an aging Space Station orbiting 400 km above the Earth .

What a lot of people did not expect though, was the fast development of asteroid mining, something that could become reality as soon as 2025. Planetary Resources, a Washington-based asteroid-mining company, has already sent a probe from the ISS, with the ambitious goal of turning asteroid water into rocket fuel and then harvesting valuable platinum-group metals from the space rocks. Deep Space Industries is another company with similar plans, they also hope to use the resources on an asteroid to make mining for valuable metals more profitable.

Except for the technical challenges, there is also the problem of convincing investors to bet on space mining. Technically speaking, everything out there belongs to everybody and anybody could claim partial ownership on anything found in space, theoretically. That is why space mining, and even space touristic companies are lobbying hard for legaly binding property rights, so that they can secure their investment and keep expected profits from their space adventures.

COMSTAC (Commercial Space Transportation Advisory Committee) has made international space a very national issue and is pushing for laws to protect the interests of U.S. American entities or citizens in space. The committee “desires confirmation that private entities which extract resources from the surface or subsurface of the moon, asteroids, or other celestial bodies own and may utilize or transfer such resources, once extracted, as they see fit.”. COMSTAC wants the US government to monitor space activities “to ensure that they are conducted on a noninterference basis and are not contrary to the national security and foreign policy objectives of the U.S.” they believe that the same laws should be applied in space as on Earth, but apparently they do not want to acknowledge that according to the 1967 Outer Space Treaty, the moon and other celestial bodies are “the province of all mankind.”

Nevertheless the U.S. Senate has passed a bill stating that any U.S. citizen shall be entitled to any asteroid resource or space resource obtained, including the ability to own or sell that resource. But they did specifically mention that no one may own an asteroid or any other celestial body, because that would violate international treaties of course. An exception is biological material or any extra terrestrial life forms that they should find. The bill did not go as far as COMTAC originally wanted, a part was omitted that would have allowed for legal action to block “harmful interference” from obtaining the above mentioned resources.

Scientists are not very happy about this development, they fear that the private sector, which is better financed, will win the race to space, taking ownership of the best celestial real estates, leaving scientists with no real choice on where they want or can conduct their research.

William Hartmann, a senior scientist at the Planetary Science Institute said that we should be more creative in finding a realistic legal framework that will benefit everyone. He says giving ownership rights to the first entity that sticks a flag on a celestial object is continuing the century old model of first come first served, which “led to greater separation of the ‘haves’ and ‘have-not’ nations and families, and ultimately led to international warfare, which continues today, to control the resource-rich parts of the globe,”

It is also not clear if other space miners will care much for American legislation in outer space,  we all know that “In space, no one can hear you scream.”

The $200 NVIDIA Shield Tablet: Damn I Love A Value

Did Tim Cook Miss A Meeting On The Hybrid Computer?