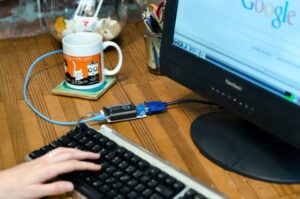 Next Thing Co., a young  Oakland based startup, has turned to Kickstarter to raise funds for its $9 computer. CHIP, similar in concept to the Raspberry PI, is a linux run mini computer with an impressing 1GHz R8 ARM processor, 512MB of RAM, 4GB of flash storage, Wi-Fi, Bluetooth, and a USB port. For a little extra money you can get an HDMI or VGA adapter, or pledge $49 and get the CHIP pocket, a device with a 4.3 inch touchscreen, keyboard, battery and of course the CHIP computer board.

The crowdfunding campaign for the little computer has been extremely successful. NTC was looking for $50,000, but has managed to convince over 36,000 backers to pledge over 2 million dollars. This is not their first campaign, a while back they managed to raise $71,000 for their digital camera OTTO, which was powered by a Raspberry Pi. Maybe using the Raspberry inspired them to make the CHIP.

The CHIP is a fully functional computer, preinstalled with Linux and the necessary software to plug and play. According to their campaign site, you can write documents, work on spreadsheets, browse the internet, play games and do whatever else you normally would do with a computer. When I think that the CHIP has more power than some smartphones and is cheaper than some Bluetooth dongles, it opens the door to a whole lot of new opportunities for the creative tinkerer.