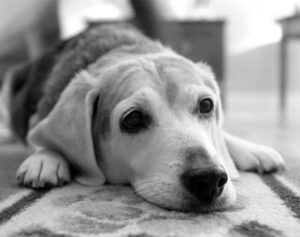 It is estimated that there are over 45 million aging dogs ( over 7 years of age) in the United States and Europe. A high number of these dogs suffer from CDS (Cognitive Dysfunction System), a whopping 68% of the 15 to 16 year olds are affected.

If your aging companion starts walking through the house at nights, does not always recognize you and has problems holding himself, then the chances are high that he (or she) is suffering from a form of dementia. Research shows that the disease progresses up to five times faster in dogs than in humans, but an early diagnosis can increase the chances for treatment. Scientists have developed a rating scale that should help veterinarians diagnose even mild forms of CDS, leading to a more targeted use of drugs and therapies, depending on which stage of the disease the dog is in.

Though, due to the intervention of humans, wolves hardly grow old, it has been observed that they treat older pack members, who are demence, like pups, bringing them food and showing a kind of tenderness. Dogs, like  wolves, have profound evaluation skills: they sense illness, injury, emotional state, trait and are aware of age. A user  “lupusposse” commented on Sciencemag.org

your domestic little wolf – your dog – has much more going on than of which you’re aware; that’s because you are wrapped up in symbolic verbal representation.

They get aches and pains, and again, recognize these in others (their vomeronasal organ and smelling ability is beyond the ken of humans, as well as their pure attentive skills, never subsumed with fantasy and projections as is so in humans), and their resultant cognitions can be seen in their consequent behaviors.

So it is a mistake to attempt to compare exactly what goes on in their aging with your own. Don’t go all Kevorkian (an euthanasia activist) on them – life is as important to each one of them , as it is to you; neither do you know their preferences.

Most probably finally, they remember only love and care.

He finished his comment with the following sentence, and I couldn’t agree more

they (our dogs) each deserve our fullest respect as another life equal to our own, although theirs blaze across the seasons more quickly.

Will we be seeing a Planet Hulk movie soon?

The Temples of Apple