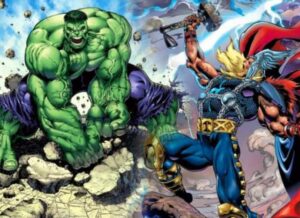 There have been lots of speculations on where The Hulk ended up after disappearing at the end of Avengers: Age of Ultron. A favorite was the storyline of The Hulks “exile” to a distant planet, which he consequently conquered and ruled, but nearly everyone at Marvel denied rumors of an upcoming “Planet Hulk” movie.

We know that the green monster with a temper will be back for THE AVENGERS: INFINITY WAR, but now there are reports that he will be appearing in the upcoming Thor: Ragnarok movie, fighting alongside the Norse God. The clue is that the movie will take place on a distant planet which is neither Earth nor Asgard. That raises the question of how he got there, and as long he is out there in space and in another dimension, he might as well conquer a planet, making a lot of fans very happy.

Even if there is no guarantee for a  Planet Hulk movie, the prospect of seeing Thor and The Hulk bash some extraterrestrial villains is more than appealing.

A metal lighter than a feather

Does your "best friend" have demence?