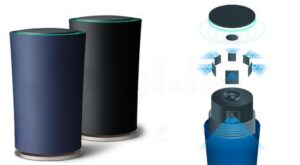 Hackers have discovered that the OnHub is running on a highly customized Chrome OS system, the same system used on Chromebooks and Chromebox desktops. Google’s first Wifi router has a Bluetooth radio, a ZigBee/Thread radio and a USB port that are disabled at the moment, raising speculations about the company’s future plans for its trendy looking router.

Using a switch, hidden on the underside of the router, the exploitee.rs group managed to reboot the OnHub in developer mode, enabling them to root the device. The group wrote “The Google OnHub is at heart a Chromebook without a screen modified as a router, and our root method is just a modified version of booting Developer Mode,”

The OnHub was originally developed as a plug and play device, making it attractive for novices who have difficulty understanding the many configurations on a router. Its Trusted Platform Module prevents the installation of alternative firmware, it has automatic security updates and the USB port was as good useless. The unveiled rooting method opens the door for enthusiasts and developers to find new possibilities on how to use the router, but it will most probably come at a cost, mainly security.

Why you may never own a self-driving car