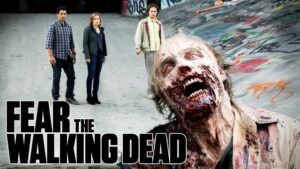 The first season of Fear the Walking Dead ended with an action-packed finale. With fans already impatient to know what happens next, showrunner Dave Erickson gave us an insight on how the show will continue.

The first season ends with the protagonists seeking sanctuary on Strand’s offshore yacht and Travis being forced to euthanize Liza after she was bitten by a zombie. The next season will continue almost immediately where the final episode ended, exploring how the characters cope with the recent tragedies also accelerating the pace of events. As Erickson explains to THR

We’ve learned a lot: Our characters in their apocalyptic education have learned what walkers are. Even Travis has had to shed some of his humanity for the first time, which was his great struggle. We’ll have more of a shorthand going into season two. There are still things for them to discover.

In an interview with Entertainment Weekly, Erickson also said

The human threat theme that plays beautifully in the comic and the original show is something that we’re going to explore as well. You’re going to see a bunch of seabound refugees over the course of season 2. And much in the same way that we have taken steps to survive and compromised our morals to do so, we’re going to have to deal with some people who have very similar objectives, and the default setting for most of these people is not going to be let’s all live in harmony and try to build a new community. It’s going to be, how do we protect what’s ours? How do we protect our family? So there’s going to be a very serious threat from other people, as there is constantly on The Walking Dead.

Fans will have to wait until 2016 for the new season.

Dell playing big, planning one of the biggest tech takeovers