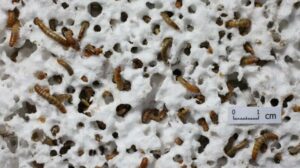 According to researchers at Stanford,  mealworms can feed on polystyrene without any damage to their health. A gut bacteria in the mealworms is capable of breaking down, and digesting, the synthetic polymer.

Polystyrene is used to make Styrofoam, known from disposable coffee-cups (although it is technically not Styrofoam). The cups are  a serious environmental problem, especially in the US and Canada, where only around 10% of the estimated 25 billion (only in the US) disposed cups are recycled every year.

Scientists were surprised (and shocked) that the beetle larvae could actually digest the polymer. They managed to isolate the microbes responsible for the digestion and use it directly on polystyrene, degradation was observed but far less effective than the mealworms. The scientists are testing if the mealworms (or other creatures) can digest other forms of plastic too.

This gives hope that there may also be seadwellers with the same capabilities, that might help us “digest” the, widespread, plastic contamination of our oceans.