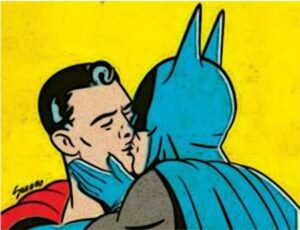 Fans are anxiously awaiting the 25th March 2016, when the “Dawn of Justice” hits movie theatres. In the meantime any news about the movie is eagerly absorbed. The latest news is that the new superhero movie will be rated PG-13, a little surprising for a Batman-Superman film. The MPAA’s reason for such a relatively high rating was “intense sequences of violence and action throughout and some sensuality.”. Sensuality?!

We all know that superman has something going with Lois Lane, and Bruce Wayne is a billionaire playboy, but traditionally the movies have never shown more than an occasional kiss. Apparently this time it is different and as expected the internet is full of speculations, slashfilm.com even suggests

The rating will most probably be because of an irrelevant scene, that we will not even notice, but rumors and speculations spicen up the time till a movie is finally released.

The shiny mountains of Ceres, still a mystery