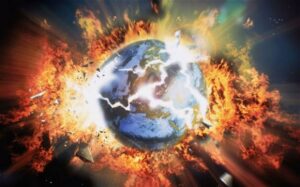 At least four space rocks are expected to pass close by Earth between the 23rd and the 28th of September. Asteroid 2012 TT5 is one of them, expected to fly past us at a distance of 8.3 million kilometers (4.6 million miles), an astronomical close brush. We also have the last blood moon lunar eclipse of an ongoing tetrad (a series of four  lunar eclipses occurring around six months apart). According to the prophecies of a few famous end time preachers, yes there are people who make end time predictions for a living, this all amounts to the breaking/ opening of the sixth seal, causing earthquakes and other disasters. To make a long story short, there are signs that the or an asteroid will hit the Earth, causing the Apocalypse.

I wouldn’t worry much, the Apocalypse is generally not very reliable, it  has been often prophesied but never shown up. NASA has also told us not to worry, they are 40% sure that they know the trajectory of 2012 TT5, and it is only a coincidence that it is named after the last Apocalypse that didn’t show up. I would trust them. despite the rumors of a secret disclaimer, voiding them of any responsibility if anything should go wrong.

I will update the story on the 29th, for the time being I will think up a very short bucket list and see if I have enough money for that bottle of 40 year old Scotch whiskey I always wanted.

The new Pebble is round

Sleepless? What caffeine does with your inner clock