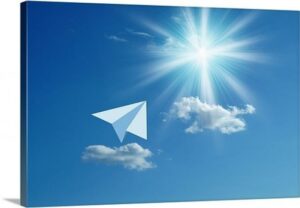 As a kid, flying paper airplanes during recess was a popular pastime. There were no smart phones to stare, pinch, swipe or stab at. The only hardware we had to play with, were calculators and the only fun thing you could do with them, was to turn them upside down and try to write “hello”. That left us with an abundance of paper, the energy and the time to try and make the best paper airplane, to win a little admiration from our peers. We would use all kinds of  tweaks to get the best result, double folding, cutting out flaps or folding a tail wing and then the competitions would begin, for the longest flight, number of loops or coolest design.

Boys become men but they hardly ever grow up, the fascination for flying paper airplanes stays. For some the pastime becomes a hobby and for others a challenge to be, or to make,  the best.

The Power Up 3.0 turns a paper airplane into a remote controlled flying machine. After folding your paper plane together and mounting the module on to it, you can use your new best friend, your smart phone, to control it. The motorized frame uses Bluetooth technology, with a 180 feet/ 55 meter range, to communicate with your phone, it can be charged using a micro USB cable and the responsive motion control is said to be simple to use. The basic set costs $49.99 and you can also buy spare parts or upgrades. You can see more in the video below.

The Carbon Flyer is the Power Up 3.0 on steroids. Instead of having to fold your own plane, you get a carbon fiber plane with a camera, which classifies the Carbon Flyer as a drone (for some people). The tech toy, as they call it, will be controlled via a smart phone app and bluetooth, but will not deliver live footage to your phone, you can record the flight on a micro SD card. Unfortunately, you cannot yet buy the Carbon Flyer, they are still on Indiegogo and hoping to deliver until Christmas. You can see what you can expect in the video below, in case you are not a fan of electro-technoish music, turn down the volume.

Next: World records and How-tos

I wasn’t surprised to find out that paper airplanes are also listed in the Guinness Book of World Records. Here are a few of the most relevant records, held by very serious, adult, paper planers.

The farthest flight by a paper aircraft is 69.14 meters (226 feet 10 inches), achieved by Joe Ayoob and  John M. Collins (both USA), at McClellan Air Force Base, in North Highlands, California, USA on 26 February 2012. The plane was constructed from a single sheet of uncut A4 paper.

The longest time flying a paper aircraft is 29.2 sec and was achieved by Takuo Toda (Japan), in Fukuyama City, Hiroshima, Japan, on 19 December 2010. The video below shows Mr. Toda in a previous attempt.

The highest altitude paper plane launch is 35,043 metres and was achieved by David Green (UK) in Elsworth, Cambridgeshire, UK, on 24 June 2015.

There are other records with paper airplanes involved but they are more events than record attempts.

What would paper airplane flying be worth if there wasn’t a World Championship? Red Bull sponsored the international event, with youths participating from all over the world. There were national qualifications and the big event was in May this year.

The Red Bull Paper Wings World Final lived up to its expectations as the top paper plane pilots left it all in the sky for a chance to be called the best in the world. Pilots competed in the Distance, Airtime, and Aerobatic disciplines, and each featured a unique array of paper planes and throwing techniques. No kerosene, no engine, just a regular A4 sheet of paper and a bit of elbow grease was enough to earn the world finals title. Check out the best action from the skies of Hangar-7!

If you want to put the office’s waste paper to a good cause and pep up the lunch breaks, there are a few How-tos on the next page.

For beginners and those who want to refreshen their paper airplane making skills, here are some basics

If you want to try and break the world record, look here

and for the really ambitious, we have an F-15