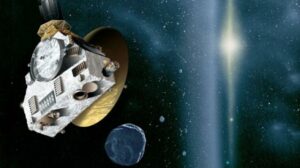 The New Horizon has a new mission, a mere one billion miles away, to observe another Kuiper Belt Object called 2014 MU69. Disappointing as it may be to Pluto fans, Pluto is only a dwarf planet, an object in the Kuiper Belt which stretches from Neptune’s orbit to  billions of miles from the sun(50 Astronomical Units to be exact).

Already having  travelled some 3 billion miles to Pluto, where the New Horizon spacecraft earned a lot of international fame for its stunning pictures of the dwarf planet, the onward journey to its next mission will not be that cost intensive.

Why go to the trouble, you may ask. As you can guess scientists are hoping to get a better insight into the origins of our universe from the about 30 miles across object(2014 MU69) “thought to represent a well preserved, deep-freeze sample of what the outer solar system was like following its birth”, and they can all extend their contracts for another 3-4 years, because that is how long it is going to take for the New Horizon to reach its new target.

3 reasons why you should understand Schrodinger’s Cat