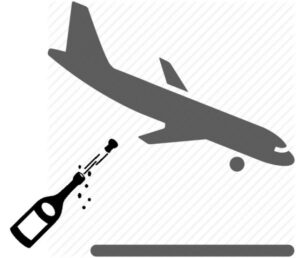 I had a few funny titles on my mind for this article, but decided not to push it on airplanes coming down and so on. The incident is kind of funny, although I am sure the passengers weren’t laughing at the moment, a plane had to make an emergency landing because of a champagne cork.

As an Easyjet spokesman confirmed, the “ EZY8845 from London Gatwick to Dalaman on 7 August diverted to Milan Malpensa as a precautionary measure due to a technical issue with the cabin crew oxygen masks.”

Apparently a stewardess wanted to serve champagne to a guest, “shooting” the cork through the airplane’s ceiling panels, causing the oxygen masks to drop and forcing the pilot to make an emergency landing for obvious security reasons. The passengers were not very amused and had a hell of a scare at that time, but it seems a lot of them, after being informed of the cause, did find it quite amusing.

All the hassle, delay and costs for a glass of sparkling wine. I hope it doesn’t become a case for flight security, depriving us of a little luxury on our next holiday flight.

Cyber Wars, what is really happening

3 reasons why you should understand Schrodinger’s Cat