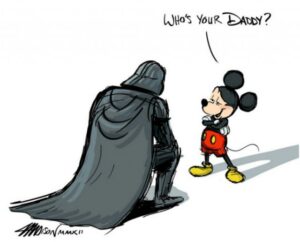 When George  Lucas went door to door, trying to find a producer for his first Star Wars movie, later titled A New Hope, he had one thought on his mind, the merchandising rights. Through his experience with THX 1138 and American Graffiti, Lucas was determined to keep as many rights on his movies to himself, as he could. He owes the production of Star Wars to the success of American Graffiti, which wouldn’t have been possible without the assistance and support of Francis Ford Coppola.

After the success of his earlier movies, Twentieth Century Fox, reluctantly, accepted to let him make Star Wars. No one was convinced that a science fiction fairy tale had any big chances at the box office. Even while working on the script, Lucas was thinking about all the merchandising possibilities – he was seeing toys, t-shirts, records, dolls, the whole thing. In his determination to control the selling of the film from the start, instead of asking for more money, George Lucas asked for the merchandising rights and Fox accepted, thus giving birth to the real Star Wars empire.

Everybody knows what happened then, the franchise made billions over the years and holds the Guinness World Record for the “Most successful film merchandising franchise.” In 2012  Lucasfilm became a part of The Walt Disney Company. At that time, George Lucas was resistant to continue the Star Wars saga but with Disney on board “the Universe” started expanding.  A new Trilogy is already planned and in the making, there will be spinoffs, new  TV shows, a theme park, new comics and so on. Giving us numerous new heroes, villains, creatures and robots to play with, to put on our t-shirts, to reconstruct with plastic building blocks and to dress as on Halloween.

With the fusion of two merchandising giants, Disney and Lucasfilm, it is not surprising that a few TV ads or banners on our computers are simply not grand enough. No, it has to be an 18 hour, global, live marketing event, introducing their “epic” merchandise to the world, so we really don’t miss out on anything that we can (or can’t) purchase.

“Over the course of 18 hours, some of Maker Studios’ biggest stars will each be unboxing a new toy from the Star Wars: The Force Awakens product line in a different city around the world and sharing the experience live on YouTube,” she said . “We’ve seen tremendous excitement for these new products and can’t wait to see the global reaction from the Star Wars fan community.”

The Star Wars YouTube channel will host the live stream, which kicks off with the first unboxing in Sydney, Australia at 7:45 a.m. local time on Thursday, Sept. 3 (5:45 p.m. EDT on Wednesday, Sept. 2), with the grand finale at Lucasfilm in San Francisco at 8 a.m. PDT (11 a.m. EDT) on Thursday, Sept. 3. Each of the 15 locations will reveal a new product inspired by Star Wars: The Force Awakens.

I am sure it will be a big success and that the empire will be pleased with its devotees willingness to enrich their lives with the oh-so-important “toys” at their disposal.

May the Force be with you.

America’s Greatest Makers Gameshow: Is It A Disaster In the Making?

Cyber Wars, what is really happening