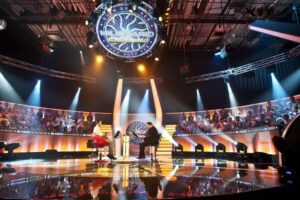 For much of my early life I was in and out of entertainment, spent 4 years trying to be an Actor and a Model (this last was mostly because the woman that headed the modeling agency was exotic and hot and I was young and stupid) and was even in a Disney commercial as a child (before they actually paid children).  So it was with some interest I heard last week that Intel was launching a game show called “America’s Greatest Makers” and I likely got a little too starry eyed because Wolfgang Gruener (who once ran this site) and I have been arguing in Facebook about whether this will be a success or a flop.  Wolfgang made some good points not the least of which is that Intel doesn’t have the greatest history when it comes to media.

So, in that context, let’s talk about the Greatest Makers Gameshow, how it could fail, and how it could be really great.

There is an argument about whether the low point for Intel and media was their Viiv effort created by a CMO they got out of Samsung who decided cubicles sucked (I agree with him by the way) and decided to take over an Intel conference room as an office (one of the dumbest things I’ve ever seen anyone do) or the Digital Joy a campaign Intel coordinated with Microsoft.   I pick the latter because when they called to brief me on Digital Joy I nearly had an out of body experience.  Maybe it was just me but Digital Joy sounded like a brand you’d connect with electronic sex toys and when they told me the name I asked whether they had searched on the web for a porn sight with that name.  I then proceeded to find one in France that was particularly explicit.

They had to buy that site (and it wasn’t cheap) and shut it down and then they released a commercial that cost them millions to make and the commercial showcased just how badly this kind of thing could be done by a tech company.  I could use the entire column talking about what was wrong with this over produced turd.  And, the Media Center PC never sold well, though I’ll grant you that most of that was because the product itself was ill conceived.

As a side note both HP and Microsoft separately did develop products that were actually pretty good.  HP pulled the plug before their product reached the stores and Microsoft refused to release the Media Center set top box even though it tested better than Apple’s or Google’s efforts.

At issue here is a common problem when a tech company wants to do media.  Too many inexperienced people with decision authority, no clear idea what the purpose of the effort actually is, and no one with both the experience and the authority to cut through the BS and get the job done.

Now I think this game show could be a lot of fun and I think it could actually be fascinating to watch but only if it were done well.   It likely starts with the judges because in a show like this the judges are the folks that are constant and their interaction either provides or adds to the drama and humor which makes the show worth watching.  I’d look at folks like Ashton Kutcher (went to engineering school, played Steve Jobs, and did a nice job working with Lenovo), Alicia Keys (worked with Blackberry and knows women and tech), Genevieve Bell (Intel’s unique and entertaining Ethnologist/Futurist), and Jim Parsons (Big Bank Theory, and the current face of Intel’s commercials).  You might want to get Penn and Teller involved either as alternates or to help with the pacing and staging, they do amazing work.

The show should be a blend of stuff that might actually make it to market and bat shit crazy stuff much like America’s Got Talent blends traditional acts with folks that have little chance of winning but do things that just look amazing (like the band that used huge Tesla coils to play music).  In fact America’s Got Talent should likely be the template.

If they focus on entertainment and amazing inventions this could be an incredible show but if they try to make it a long Intel commercial it might not make it through three episodes.

If this program is successful it could do wonderful things for the Maker Movement, folks are really creating some amazing blends of art and machinery and given the motivation of a million dollar prize, this could be an amazing show to watch.  But I get Wolfgang’s concern that Intel greatest work was mostly in the Dennis Carter years and putting together a successful game show isn’t easy and it would really be easy to screw this all up.

However I’ve seen Intel’s new CEO, Brian Krzanich, on stage a number of times now and he seems to get entertainment and if he is involved I believe this game show could be amazing.  I’m sure he gets that if this thing flops, the failure will bleed through the show to Intel and him.  So I’m betting the show will be great, what do you think?

God Mode, a Windows 10 tweak with a cool name