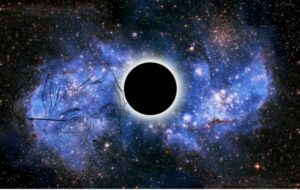 Usually when Stephen Hawkings says something it makes the news and this time he said something to a room full of scientist at the KTH Royal Institute of Technology in Stockholm Sweden that made big news. He addressed a problem that has preoccupied physicists for the last 4 decades, the black hole information paradox.

To get a better picture of why his new theory is causing such hype,  we should take a look at the, hypothetical, Theory of Everything (ToE). Modern physics is based on two main theories, general relativity (GR), all that Einstein stuff about the speed of light, gravity and black holes, and the quantum field theory (QFT), all about the itsy-bitsy-tiny-particles and how they work. The problem is that these two theories work perfectly well in their own domains, big planets versus tiny particles, but they are completely incompatible. In physics you can’t have two different theories both being right, a paradox. Some scientists believe that string theory could be an alternative, unifying the two, but even Sheldon Cooper gave up on it.

Having said all of this we come back to black holes and the information paradox. Applying GR, anything that gets sucked up into a black hole will get utterly pulverised and change its state becoming a singularity, leaving no information, but the laws of quantum mechanics say that everything in our universe is encoded with quantum mechanical information, this information can never entirely disappear, no matter what happens to it (it is something very quantumy and has to do with waves and evolution operator). So here we have our paradox, how can information be destroyed on one hand  but must be preserved on the other.

Here is where Stephen Hawking comes to the rescue. His new theory says that black holes don’t actually eat up all this information but leave it on the surface, like a 2D hologram surrounding the black hole. The only problem is that the information is so messed up that nobody can do anything with it BUT the information is there. Now scientists are all excited about the prospect of getting closer to a “Theory of everything” and being able to unify the laws of physic.

For all those black hole phobists out there, who are scared of being swallowed by a black hole, the good news is, according to his new theory if you fall into a black hole you have a good chance of coming out in one piece…in another universe that is.

Space menus, from pizza to poop (and back again)