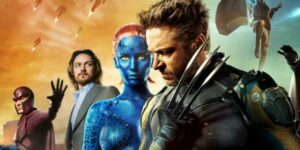 X-men: Apocalypse is one of the many , highly anticipated, superhero movies scheduled for the coming year. Like the other movies the plot is kept secret and fans are expecting game changing events regarding the future course of the franchise.

Director Bryan Singer posted a set photo on Instagram recently, officially announcing the end of production on the ninth X-Men installment. The picture shows some kind of ruins or a temple with a woman standing in the middle, leaving lots of room for speculation on where the scene might be and who the unknown woman is.

We still don’t know much about the movie, except that it is set in the 1980’s, as a sequel to X-Men: Days of Future Past. The bad guy this time is a character called Apocalypse, already familiar to people who have read the comics. Taking a glimpse at his credentials, this guy is the mother of all villains, an invincible, immortal, telepathic, flying bad ass.

Having a good cast, an experienced director and a promising storyline, X-Men: Apocalypse has the potential to be a big Box office hit, keeping up with tradition. Now all we have to do is wait another 9 months before we can judge for ourselves.

The 3D scanner in your pocket

Stephen Hawking, his new black hole theory and what it means