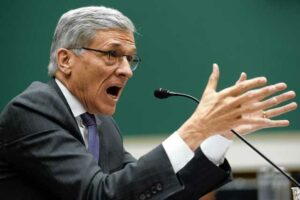 Contrary to what the telecos predicted if the FCC’s Title II regulations were implemented, it turns out that the net neutrality rules haven’t slowed down anyone.

Speaking at The Brookings Institution today FCC Chairman Tom Wheeler pointed out that many times Washington rhetoric has little to do with reality. “[There is] a disconnect between what is said in Washington advocacy and what happens in the market,” Wheeler said.

“The CEOs of Sprint, T-Mobile, Cablevision, Charter, and Frontier have all publically said Title II regulation does not discourage their investment,” Wheeler said. “Recent transactions, both announced and rumored, point to the same conclusion. And, of course, the post-Open Internet announcements by AT&T, Bright House, CenturyLink, Cincinnati Bell, Comcast, Cox Cable, TDS Telecom, and Time Warner Cable about their plans to expand their broadband service certainly speak for themselves.”

Back in November 2014 AT&T CEO Randall Stephenson said they would be halting their high-speed fiber infrastructure build-out until after the FCC makes a decision.

“We can’t go out and invest that kind of money deploying fiber to 100 cities not knowing under what rules those investments will be governed,” Stephenson said. “We think it is prudent to just pause and make sure we have line of sight and understanding as to what those rules would look like.”

But today Wheeler reiterated previous statements that the FCC would not regulate rates, require unbundling of networks or impose tariffs.

So Title II has been implemented, a federal court has already refused to delay its implementation (although there are still a slew of lawsuits pending) and – surprise, surprise – the sky did not fall, millions of people were not put out of work and ISIS did not invade Nebraska.

So I guess Tom Wheeler was right after all.

New FLIR One Smartphone Accessory: The Tool That Grants Superpowers