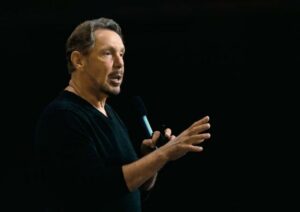 I attended the Oracle Cloud event at their headquarters in Redwood City this week and I found it rather fascinating.  This was the first time I’d seen Larry Ellison present in person but I had watched streamed events in the past.  Watching him brought to mind three things: One; that the power a company founder wields with a firm of Oracle’s scale is incredible.  Two; that top executives can retire in place and become impediments rather than assets.  And three; that finding people that have the balls to tell someone like Larry Ellison he needs to bring it up a notch are in short supply (likely because they tend to get shot).

In terms of sheer breadth what Oracle announced was impressive covering a broad spectrum of SaaS, IaaS, and PaaS offerings (Software, Infrastructure, and Platform as a Service).  They are clearly serious about this segment and have been aggressively investing in it.  Oracle is famous for making crazy claims and they didn’t disappoint at this event boldly claiming they could provide Cloud Archive Storage at a cost 400x lower than their peers and 10x lower than Amazon.  Clearly there are two problems with this, Oracle’s competitors have also been saying they can, at scale, price lower than Amazon (something they actually support with facts) throwing into question Larry’s entire claim.  Without support a claim like this just causes us (analysts) to doubt everything else undermining the entire effort.

The Power of Ellison

A founder like Ellison is an incredible resource because you can just put them on the stage without a lot of additional work and they can hold the audience’s attention.  It appeared Oracle had followed Apple’s old practice of seeding he audience with folks who knew when to applaud and cheer which raised the energy in the room and the combination made the experience far more entertaining than it otherwise would have been.   If a founder can present, and Ellison certainly can, this is a huge asset and Oracle clearly used it to its advantage.

The Problem with Ellison

First, some background: I used to compete in public speaking, ranked 3rd in the nation at one time, and have been a coach or a judge for a number of firms over the years.  Ellison is a natural like I am and that means that without rehearsal he can often perform better than 90% of the folks who actually rehearse.  But you can still tell when someone “phones in” a presentation.  And Ellison phoned this one in.

Now, if this had been a new building or something trivial it wouldn’t make a difference but this Cloud effort is incredibly important to Oracle and deserved more of Ellison’s attention and effort.  We often refer to what Ellison is doing as “retiring in place” and it can happen at all levels of a company.

The interests of the executive have moved on but they don’t want to give up the title and perks so they stay on while their contributions and level of energy drops off a cliff.  Now, be aware this is one data point and it simply may be that Ellison was brought in at the last minute or that the pitch was massively altered before he gave it (not uncommon). But from someone of Ellison’s stature, experience, and capability this event looked like he put in minimal effort.

The Problem with Powerful CEOs

Years ago I was fascinated about the only CEO that was ever fired from IBM (John Akers). So I spent a lot of time researching this event (while I worked there), eventually writing an internal report to prevent this ever happening to anyone else.  One of the principle causes for the near collapse of IBM was the isolation of the CEO and that, over time, the number of people who had the position and security to tell whoever was CEO what they needed to hear dropped to zero while the number of folks that told him what they wanted to hear was legion.

This often happens when you have any person with a lot of power.  Over time, those around them learn or evolve to conceal problems and the CEO effectively becomes blind.  I most recently saw this with Meg Whitman when she asked me about a talk she’d given and I responded that the lack of content made her look vapid.  Even though I spoke to a number of peers who agreed with me before talking to Meg, it was clear not a damn one of them said the same thing to her. They recognized better than I did that Meg had surrounded herself with folks that told her what she wanted to hear, meaning she would have big problem with the truth (which she did).

Larry Ellison is a smart guy, but people like to hear things that support their world view and are complimentary, and they can develop a nasty habit of shooting critics (Steve Ballmer was known for this, for instance).  But, if used badly this flaw results in problems not being addressed in a timely fashion and eventually becoming too big to overcome (as Steve eventually found out).

You don’t get to be where Ellison is without caring about wining but if folks lead you to believe that a mediocre job is good enough, you’ll likely not put in the necessary effort.  I think it likely that Ellison is in a bubble which may be partially why Oracle’s financial performance has been lackluster of late and why he appeared to have phoned in his cloud presentation.

Oracle, on paper, has made an amazing pivot to the cloud and appears to have a credible offering.  Hurting those efforts are its unbelievable pricing/competitor claims and a CEO that may have retired in place.  At this event I saw two futures for Oracle, one where they complete the pivot to the cloud and again become relevant to the emerging world of EaaS (Everything as a Service) or the one where their founder CEO becomes their biggest obstacle to overcome and Oracle continues to slide.

The real future for Oracle has yet to be written and it likely all hinges on whether someone with stature that Larry Ellison respects can or will point out that he needs to step up or step out.  At 70, Ellison is in far better shape than I am. Unlike many of a similar age, he actually does still have a choice. For his own and Oracle’s sake, I hope he makes that choice wisely.