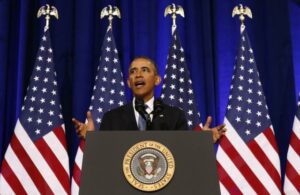 President Obama issued a statement saying that Sony made a mistake pulling the film.   I think this was reasonably well played because the US government was between a rock and hard place.   First they can’t allow a large US company to be blackmailed successfully by violence because that would promote similar acts in the future against other firms, and two they likely know that it wasn’t the threat of violence that caused Sony to pull the film, it was the threat of releasing more email that could have put Sony out of business and landed some executives in unemployment lines or even in jail.   The threatened “Christmas Present” was potentially a company killer.  Let me explain.

Recall that when North Korea said they considered the film “an act of war” Sony blew them off.  Realize North Korea is a nuclear power and if there was a concern over violence that should have triggered the pulling of the film but it didn’t.  In Sony seemed to act as if that was a non-event.   So safety wasn’t on the top of their minds.

The threat of a 911 type of attack on theaters was far more amorphous.  There was no evidence of even the capability to carry out such a threat according to the US intelligence agencies, but it isn’t even clear what that would mean.  Airplanes flown into theaters?   It seemed more like something someone would say to get a response, which is what North Korea normally does, than it did a promise of action.

I heard one person argue that since the country had done everything with the data they promised to do they were credible.   But there was no evidence they even had the capability to carry out a broad attack on the US, while they did have control of the data.

I used to be an internal auditor and one of the things we did was email audits.  We’d pull a fraction of a percentage of the emails people sent and we’d find amazing things.  Bribes, folks using sex or requiring sex, lots of affairs, folks (men and women) mailing inappropriate pictures, racist jokes, conversations with attorneys on ongoing litigation and contract negotiations, conversations about employees that are actionable, conversations about bosses that should get people fired, misappropriation of company materials, notes written about or under the influence of drugs, and illegal activities (buying illegal drugs).   And that was only pulling a fraction of a percentage of email.  I think we often didn’t pull more because management was afraid of what we’d find.  But mostly it was because a small team can only go through so much email in a week.

North Korea took a 100% sample of email and they have lots of people to go through it.  They have the kind of manpower that a law firm going through discovery couldn’t possibly afford and I imagine they found evidence of most of this.  Individually Sony could survive any one or small number of scandals but the total could have been massive and likely killed the company.

But Sony couldn’t say they weren’t bringing out the movie because of the email risk.  Largely because a lot of folks would start to wonder what was in the email and some of the executives might be asked to resign regardless.  They had to create the impression they were making the decision for some other reason and so they had the Theaters take the fall.  But while some of the theaters likely were concerned about an attack (big city premiers) most were likely worried, based on Sony’s comments, that Sony was going to pull the movie at the last minute leaving them with no movie to show over the holidays (and this is a big season for movies).  So they didn’t pull the movie because of the physical threat they pulled it because Sony had indicated they might not get it anyway.  In effect Sony created the theater problem and then blamed the theaters for their decision in order to conceal the email exposure.

The US three letter organizations aren’t stupid and they undoubtedly know exactly why Sony made the decision they did but can’t “out” Sony without looking like they are helping North Korea.  On the other hand they can’t let it look like North Korea can get away with using a threat of violence, particularly one connected to 911, on a company like Sony successfully.   Finally they also know that if the go after North Korea hard the country is likely to release the email anyway making it look like the US is helping Sony cover up crimes.

So Obama is being cagey about what he is going to do so he doesn’t accidentally trigger the release and pointing at the Sony decision as wrong so that, if the information is released, he doesn’t look stupid or worse.   He can simply pivot on Sony.

Frankly I don’t think the movie “The Interview” should have been made or released.  To create a movie about killing a sitting head of state will always risk retaliation and pointlessly since you could easily abstract them and not personally call them out by name.  If you are going to do this you likely should massively update security so your people and systems (North Korea has a significant hacking capability) aren’t exposed and it appears Sony did neither which makes the result largely their fault.   Picking a fight you aren’t prepared to fight is pretty stupid in my book.

Finally I don’t think we’ve heard the end of this by a long shot.  This could still escalate into a real war and it remains very likely North Korea or someone else will release the juiciest emails and, if enough come out at once, Sony won’t survive.   All of this reflects some really bad judgment at Sony which should be addressed before another set of decisions, assuming Sony survives this set, doesn’t kill the firm.

So this isn’t over by a long shot.

Another Rock Series is Headed to Cable, Thanks to Scorsese and Jagger