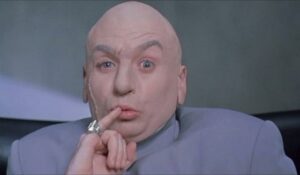 If you remember the Austin Powers series when it was in its prime, you were probably also a big fan of his arch nemesis, Dr. Evil. Legend has that Dr. Evil was an imitation of SNL producer Lorne Michaels, down to the accent and extended pinky, but he was also a take off on legendary Bond villain Blofeld.

Now Mike Myers made a trip back to SNL, where he scolded North Korea and Sony for giving “evil organziations a bad name.” He tells Kim Jong-un that the best way to kill a movie is to move it to January, and that Guardians of Peace should change their name because “there’s already a GOP and they’re already an evil organization.”

Another choice line that puts a lot in perspective:  “You’re one of the most evil countries in the world and your act of war is to kill a movie?” Myers even made a joke at his own expense, saying that if you want to put a bomb in a theater, try his notorious 2008 stinker The Love Guru.

As a fan of the first two Austin Power movies (the third was a complete pile of dung), it’s nice to see Dr. Evil return after a very long absence. Maybe he’ll be behind a hacking if there’s another Austin Powers movie in the works, holding the world hostage for a million dollars. So come on Dr. Evil, come back and show the world how evil you can be, throw us a freakin’ bone here.

Why President Obama is Hedging On Sony’s North Korea Mistake

Star Trek 3 Officially Has a Director