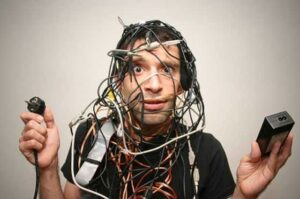 The AllSeen Alliance, formed late last year in an effort to push interoperability among smart home devices such as TVs, smartphones and household appliances, announced that Sony is the latest company to join its list of 53 community members. Sony joins Microsoft, LG Electronics, Panasonic, Sharp, Haier and Qualcomm Connected Experiences among others.

The AllSeen alliance is betting on AllJoyn, an open-source software originally developed by Qualcomm that can work on devices with different hardware platforms, operating systems and other components.

AllSeen is just one of many competing ‘standards’ aiming to be the core of a connected home where all our appliances trade info with each other and make our lives just that much more wonderful.

The Open Interconnect Consortium is one of the other players in the Internet of Things push that all the experts agree will be one of the ‘next big things.’ The OIC counts Intel, Samsung and Dell among its members, and it too plans to hammer out open-source specifications for IoT interoperability.

It’s still not entirely clear where other players might be heading. Google obviously has an interest in IoT stuff since earlier this year they spent $3.2 billion to purchase Nest, the manufacturer of a smart thermostat and a smart smoke detector.

Apple also has their HomeKit initiative with members such as TI, Philips, Honeywell, Marvell and Broadcom among others.

There is also Samsung who announced their Samsung Smart Home offering.

And there are a smattering of other platforms that have either sprung up overnight or have been kicking around for years.

Now just because Sony has joined the AllSeen Alliance doesn’t mean they will actually make products compatible with AllJoyn. Sony has made it a policy to join just about any initiative that it sees might help them or might end up being a competitor (they were actually a member of both the Blu-ray and HD-DVD alliances and hold patents for both of those formats).

The IoT may be the future for all of us in one way or another but it is going to take some time before we get all these interconnection issues ironed out.

My personal opinion is that the company who will ultimately win is the one who comes up with a completely agnostic, cloud-based solution where device manufacturers can upload their product specs (and perhaps even their own APIs) and then let their devices connect to a central ‘traffic cop’ controller or hub to update their status or take orders. That way companies can use HTTP (or whatever secure Internet protocol they decide upon) to communicate with an intelligent controller hub that handles all the interconnections between devices. People would set up personal accounts for their homes and let the hub do all the fussy bits for them.

Every time you buy a new smart IoT device you plug it in, turn it on and it connects to your account to register itself. It tells your hub account what type of device it is, what it can do, what can be changed etc. and the hub takes over from there. The hub would decide how often to poll the devices, when to change settings based on all the other IoT devices you have, when to send your smartphone notifications (or when to call the fire department or police). When you go to your hub account dashboard it would show you what devices you have, what their status might be and perhaps even offers to link devices if appropriate. The hub could also store your home (and phone) GPS locations so that it could match weather reports to thermostats or automated sprinkler systems. And on and on.

That way individual device manufacturers don’t have to worry about alliances or protocols, or what languages or OSs other devices are using or even how they fit in with all the other IoT devices someone might own, the hub would take care of all of that. The hub would be the smart part.

Samsung vs. Apple – War of the Phablets: Apple Should Win This Round