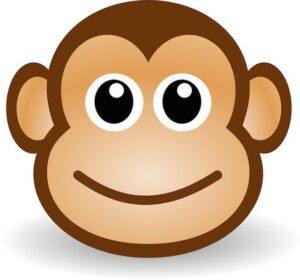 David Slater, a British photographer, was in Indonesia in 2011. He was taking pictures of monkeys in the jungle and had set up his camera on a tripod, framed the shot and got the exposure right, everything he needed for a good shot.

In his defense, he did all the work, but along came a monkey, a crested Macaca nigra to be precise, who took it upon himself to press the button and become the world’s first monkey selfie celebrity.

Slater’s grip however is that as a result of the monkey’s audacity  he has lost nearly $16,800 in royalties for what he believes are his copyright images.

Because the monkey selfie was published on Wikipedia, Slater had asked for it to be removed because it was his copyright and he was selling his monkey pictures around the world and doing nicely, but Wikipedia said, No, the monkey done it so, Mr. Slater, are merely an evolutionary enabler of monkey selfies.

Actually, Wikipedia has officially said that under US law no one owns the copyright so it seems like the monkey is screwed in the deal, too.

Slater is taking it one step further though because he told the BBC, “If you look at it, the monkey is my assistant. This has to be looked at in a court of law.”

Slate is not monkeying around on this issue.

Unfortunately, no one has the monkey’s true feelings on record so, it seems like we are never going to resolve this issue satisfactorily.

Everything is hackable including your car

The future of funerals – video will apps, bitcoins and outer space