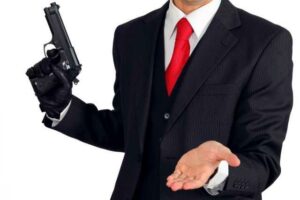 While Netflix has been in an ongoing battle of words with ISPs, today AT&T announced that Netfix is paying them extortion money too.

According to AT&T spokesman Mark Siegel, “We’re now beginning to turn up the connections, a process that should be complete in the coming days.”

We’ve all heard about the battles that Netflix has been having with ISP’s such as Comcast and Verizon. Netflix claims that broadband Internet providers have been purposely ‘throttling back’ Netflix speed in an effort to extort money from the company – forcing them to pay extra in order to get more reliable connections. Netflix says that ISPs are double-dipping by charging Netflix for access to bandwidth that the ISP customers already pay for.

Netflix has also started publishing speed tests for different ISPs in different markets showing people that in many cases customers aren’t getting what they paid for.

The ISPs have countered with the argument that they aren’t throttling back anything, it’s all Netflix’s problem, there are network congestion problems, Netflix is a bandwidth hog, they aren’t extorting money, etc. However, if Netflix were to pay extra fees then presto-chango! there might be a few extra megabits of bandwidth available lying around somewhere that could be dedicated to Netflix.

I admit that I’m on Netflix’s side on this one. Comcast and other ISPs have been complaining about congestion and other problems that they blame on Netflix, yet at the same time Comcast announced that unless you specifically opt-out they will begin sharing your WiFi connection with anyone who wanders within range who also have a Comcast subscription. And if they aren’t already a Comcast customer they can pay a fee (to Comcast of course) to use your WiFi. In other words they will be selling the bandwidth that you already pay for.

And ISPs keep advertising that they are enhancing their services and will be bumping up broadband speeds for some customers. And if you really want more bandwidth they’ll be more than happy to upgrade you to a business plan.

Yet where I live, Comcast can’t even stream the local television broadcasts without frozen frames and dropped audio and many of their own ‘On demand’ programs simply won’t play. If they can’t even stream their own programming how are they going to sell the bandwidth that I pay for to other people? Or maybe they are just making their own service suck so that people will want to upgrade to more expensive plans.