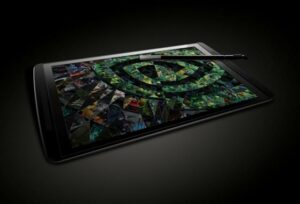 NVIDIA just launched their new Shield Tablet and it is an impressive piece of hardware they are also working aggressively to put the same K1 technology that makes the Shield tablet into cars and there may be a way to connect the dots in the automotive aftermarket and change cars forever.   Sometimes a revolution can do interesting things to a market and Tesla has started a revolution by basically building a car around an NVIDIA powered tablet.   One of the most unusual, and deeply loved, features of the Tesla is the huge tablet like screen that dominates the center dash and controls most aspects of the cars suspension, performance, heating and cooling, and entertainment.  But what if rather than looking like a tablet it actually was a tablet?

I started thinking about this when I realized that an increasing number of high end cars were going the Tesla route either by putting in primary instruments using a tablet like display panel, or secondary functions with a center Tesla like mount, or both.   The problem with using high technology for displays rather than mechanical gauges is that the gauges always look relatively up to date (physical gauges don’t change much) but advancements in technology can make the displays of today look like crap in a few years and advancements render them obsolete.  It isn’t just the display either it is the technology behind it.   Tesla actually thought this through and much of their technology is modular because they expect to take the cars back, update them, and then resell them back to users at lower price points.

Car dealerships often make more money off of used cars than new cars, imagine if they could upgrade used cars and then resell them refurbished at higher prices.   In a world increasingly using ever more advanced apps and entertainment systems this would keep cars out of landfills longer (good for the environment), make the dealers more money, and if the car companies provided the modules they’d have an extended revenue stream as well.

What really got me thinking about this is a product called Datalink Maestro.   It pulls the information off your car’s information network and creates soft switches typically so folks can discard their aging car infotainment system and install a new radio.   It even retains some of the core car features, like Sync in Ford, ONSTAR in GM, and the center console screen in VW (and I imagine in Audi).   But what if, rather than connecting all this goodness to a car radio you connected it to a dash mounted tablet like the NVIDIA Shield Tablet?   You’d need amplifiers but most current generation car stereos use secondary amplifiers now.   You could then dock your tablet to the car, charging it at the same time, and use your tablet (and screen size of your choice) to customize your ride with software.

There are actually several tablet stereo head units in market (here is one from Amazon) but they lack the performance of the NVIDIA Shield Tablet.

To really render the gauges and information something that performs as well as the NVIDIA K1 is a requirement.  You want to be able to make the gauges and information displays look as rich as possible to fit in with the rest of your car and yes to get that “wow” moment when folks see your dash.  This isn’t just for you in the aftermarket but for car makers who want folks to be so impressed they buy the car.  In addition, with the tablet, the car owner has two additional advantages.  Their preferences (virtually all of them) can go with them from car to car, the tablet they are using might carry the brand of the car they are so proud of owning (increasing advocacy for that brand) and it could be used as an additional authentication method to prevent the car being stolen.   The single WAN wireless networking connection and subscription fee gets more utility because it both supports the car and the tablet use and you can play back any information you want to show friends or your mechanic that the tablet captures with the right software (it could become your personal black box connected to the cameras in and around the car).   Though using this to teach your spouse how to dive will likely win the argument but lose you the house so you’d need to be careful.

Wrapping Up:  The Portable Car Display

As car displays get more and more like tablets I see a future where products like the NVIDIA Shield Tablet become your interface to the car and your connection in to it.   As we move to self-driving cars the only interface you might have is with the tablet which would display a face connected to a digital avatar like Apple’s Siri or Microsoft’s Cortana who will be your virtual chauffer and personal aid keeping you company through your day and managing the technology, and drive, for you.   Products like the Shield Tablet, K1, and Maestro could change forever how we interface with our cars and with our car companies.