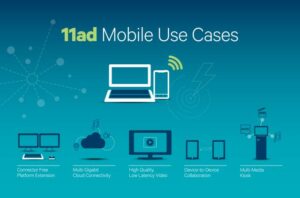 Qualcomm announced they were buying Wilocity today and with them a major position in WiGig which has the potential of massively increasing the bandwidth to the wireless devices that support it.  This will come on top of their 802.11.ac MU-MIMO technology coming out later this year that will massively improve your connectivity at current speeds.  The combination means that by the second half of 2015 for those of us on top end new mobile devices our wireless experiences should be amazing.   Let’s talk about what this means for our near term future.

The benefit of MU-MIMO is that an access point can provide better connectivity to more people at the same time.   This means if you are using Wi-Fi at work, in a hotel, at an airport, or at an event where more than a couple of folks are connecting to the local access point rather than getting the horrid experience you likely get now things should work much more like they do at home or when you are the last one on your floor working late after all the smarter people went home.  This may actually improve wireless in airplanes but likely not as much as we’d like until they fix the amount of bandwidth going into the plane.  For those of us that go to a lot of events this could be particularly attractive.

What WiGig ads is bandwidth.  Now it has some limitations like it doesn’t go through walls or even screens that well but as long as you have line of sight to the access point you get near gigabit performance.   This could be anything from streaming 4K video to your TV or a projector to downloading a movie between planes in the few minutes you have at the airport.   If you are gaming you can much better get a high performance streaming experience with this technology when you don’t have a hard wired cable.

So with both technologies available from Qualcomm in 2015 the future should be really interesting.   Think more wireless docking solutions like the ones WiGig products Dell already has in market.   Imagine conferences where not only can everyone connect and get decent bandwidth the demos aren’t overwhelmed on stage and the slides can be streamed directly from the speaker’s tablet or Smartphone.   Imagine kiosks in airports where you rent a movie, buy a book or newspaper, and instantly have it transferred to your tablet, phone, or laptop (well you’ll likely have to wait a few minutes for a high definition movie but it’s a few minutes not an hour or more).   Or imagine forgetting your tablet and being able to buy another at the airport and have it wirelessly cloned to your old one in a matter of minutes wirelessly.    Imagine being in a network of people who share their routers and having high performance WiFi most everyplace you go (currently that is a feature in the new 8.1 Windows Phone release) without any adverse impact to your home enjoyment.  Now imagine the same thing in most every car.

Imagine wiring your home and business for anything other than power to be a thing of the past.  Unfortunately true wireless power is still over the horizon.

Overall the acquisition that Qualcomm announced today will be part of the foundation of an amazing wireless future that will include MU-MIMO one where we’ll be complaining about the signal and even needing to wire for networks far less and enjoying high bandwidth pervasive wireless capability far more.   This will massively enable cloud services ranging from gaming to word processing and help make sure our computing experience after 2020 is far more appliance like, you just connect and all of your stuff is not only where you are but works as well as it would if it were also running where you are.   I think the kids in 2020 will look back much as my generation did for kids that didn’t have TV or most of you look at those of us that grew up without the internet and wonder how anyone lived without high bandwidth pervasive wireless capability.

Be careful what you wish for. ‘Right to forget’ beginning to backfire

Amazon employee goes to Google and gets sued right back