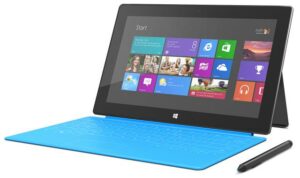 There is a certain value proposition to the idea of a 2 and 1, basically for the price and space of one product you get the value of two.   The problem has been, I think, the tendency to create a compromise.  The typical clam shell 2 in 1 is heavier and more expensive than an ultra-book, and larger and much more expensive than a tablet.   They perform decently as notebooks but few use them in tablet form.   Surface 3, available today in stores, focuses on being a great tablet first and then backs into being a notebook.   I think this is a better approach if you want someone to use the device in tablet form.  It first has to be a decent tablet.

The Problem With Tablets for Business

It generally comes down to the fact they don’t run Microsoft Office well.   Yes you can now run Office on a 10” or smaller tablet but the application was designed to be on a 12” screen or larger and it is gets increasingly painful to use the smaller the screen gets.   Now even when Office is fixed you need the extra screen Real Estate to bring up reference material you are writing from or to keep track of the other things like social network and email that we tend to like to deal with real time.  Windows Tablets that were successful in Healthcare, Insurance, or other business vertical markets tended to always fall in this larger form factor range

So a tablet for business is likely best around 12” because that is the smallest size that has been successful for a notebook computer running Office.  This is why Surface pro 3 is larger than 2 was, it had to be to embrace what people need from a device for work.

One of the things you get with a third generation product is user input.   The first generation is typically a shot in the dark, the second generation primarily deals with problems then vendor had because customer feedback is still not well defined enough to make it into product, but by the third generation the vendor has captured the voice of the customer and now knows what worked and didn’t work with the initial offerings.

There are four clear improvements based on this feedback.  The keyboard can be shortened to better fit on Airplane tables, the magnetic plug for power comes out more easily so, if you trip on the chord it comes out rather than tosses your tablet to the floor at speed, and the kickstand has more adjustments so you can better position the tablet based on your needs.   Fourth is a larger, better, touchpad.  The initial design was too small and almost painful to use.

As a result this version is far more useful than prior versions and less likely to be damaged by a lose chord and stray foot.

Surface Pro 3 uses Intel’s 4th generation Core processor.  Intel has been steadily increasing the power efficiency of their premium line and the base Core i3 is likely fine for most people.  If you need this product to fit into an enterprise you should jump to Core i5 but given this is a tablet I don’t see any reason to go to the Core i7 even though it is offered in the product as another option.  Ultrabooks started out with 2 to 3 hours of battery life but current generations get 6 to 9 hours depending on what you are doing which is still below an ARM tablet but likely more than adequate for most.  The charger for this product is relatively small and doesn’t add much carry weight.

Wrapping Up:  What We Learned

I think what Surface 3 showcases is that if you want a device that does two things it has to do at least one of them well.  I still remember the Pinto Car Plane which sucked as a plane and, well it was a $200K Pinto (Ford Economy car from the horrid 70s).   Granted what killed it was the wing separating from the car with the entire executive team in it, but had they made a great plane that was also a car or a great car that was also a plane it likely would have done better (and maybe not killed its founders).   The Surface Pro 3 is a decent professional Tablet, and it is a functional laptop replacement.   Now we’ll see if the market can get over the impressions of the first two iterations and see it as a value.