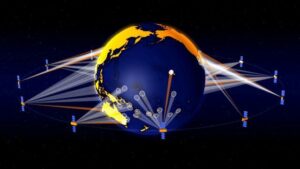 Google has plans to spend $1 billion (probably more) on a fleet of 180 small, high-capacity satellites orbiting the earth at lower altitudes than traditional satellites. The satellites will supposedly be part of a coordinated effort to deliver Internet services via satellite, high-altitude balloons and drones.

The satellites are supposed to be significantly lighter and cheaper to launch than previous satellites. Tim Farrar, head of satellite-consulting firm TMF Associates estimated that 180 small satellites could be launched for as little as about $600 million.

People at Google’s Project Loon are already working on high-tech, high-altitude balloons to provide broadband service to remote parts of the world and underserved locations. (Okay, balloons don’t sound very high tech. Guess they’ll have to buy a ton of string to tether them all.)

Google hasn’t officially come out and stated exactly what their sky plans really are or how these pieces will fit together but you sure have to hand it to them, it’s all very sci-fi (or Jules Verne-ish at least).

Along with the satellite/balloon/drone approach, Google is also working on fiber optic broadband in some select cities. One wonders what’s next. Broadband delivered by robotic cats with tiny antennas mounted on their furry backs? Laser beams bounced off clouds? Stone submarines transmitting from the Gulf of Mexico? High energy tunneling particle accelerators? A broadband nexus at the center of the earth?

Whatever they come up with I hope that at least some of it works.

iPhone apps to get Bitcoin friendly