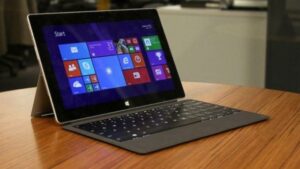 Today Microsoft launched its third generation Surface product for folks that want both a tablet and an Ultrabook but only want to carry one product. It generally takes three generations for a product that is approaching the market in a unique fashion to become mature enough to be interesting to a broad market, which is why it is generally easier to just copy something like Samsung did with the iPad, if you want to get to volume quickly. Let’s talk about Surface Pro 3 this week.

Problems with Surface Pro 1 and 2

Surface Pro was always going to be a difficult birth.  Tablets and laptops weren’t even close in size, weight, and battery performance when it launched and this first generation showcased this problem in spades. It was heavy, it had battery life that almost painfully short, and while it had some compelling features (a magnetic keyboard and magnetic power cord) they didn’t work very well. The keyboard flexed too much and the magnetic power cord was too tight making it hard to plug in and causing it to bind so that it’s advantage, fast disconnect if you tripped over the cord, didn’t work (which is why my first Surface Pro has a big dent on one corner). Price isn’t as big a problem is the product does what you want but the first generation really came before Intel was really ready and the result was ugly.

Generation 2 was a sharp improvement in battery performance showcasing Intel’s massive war like effort to create a mainstream part that was more power efficient. It had an improved screen and the magnetic power connector actually worked properly and there was an optional keyboard with a battery which was stiffer and gave the product decent battery life. But it still looked a bit clunky, the screen was still too small for work and while improved the product just wasn’t where it needed to be.

Surface Pro 3 showcases why third generation products are worth waiting for.  Improving on the advancements of the second generation this product is far more useful as a work focused offering. The first thing is that it really doesn’t look like the first two generations, thinner, sleeker, far more attractive this is a product people can be proud to carry.   It has a larger 2K screen which can display content more in line with a 13” laptop even though it is a 12” form factor. 12” is usually the smallest screen people will accept in volume and 13” is thought to be the ideal balance of size and weight. The base keyboard is not only far more robust it can be retracted into the product addressing a problem with using the product on airlines, versions 1 and 2 were too long to work with comfortably on a plane (granted when flying today the word “comfort” is probably an overstatement in general).

Intel’s technology has finally become competitive for a portable product and battery life is far better (though I’d likely still favor the keyboard battery option). They even improved the magnetic power cable (something that isn’t even available in an iPad, something I find strange since Apple pioneered this technology)) so it is both easier to connect and protects the product from that sudden fall even more successfully.

Pricing is improved with the base offering at just under $800 but realize this is a core i3 and most companies will prefer the under $1,000 version with the Core i5 because i5 comes with all of the remote management functions that businesses typically require. In a tablet core i3 is adequate.

Some additional business improvements include a massively improved N-Trig stylus which is far more accurate and useful (for instance you can use the button on it to take fast screen shots or open OneNote), and it even comes with a dock option (often a business requirement).

Wrapping Up:   Ah The Third Generation

Surface Pro 3 is better on virtually every vector and it reflects the benefits of waiting for the third generation of an offering. Now we’ll still have to see if the market wants a tablet that is a fully capable ultra-book but at least with this offering there aren’t any ugly tradeoffs and the design is stunning. We’ll likely have to wait for a refresh of the consumer version of this product which I expect will look vastly different than Surface 2 does today. But, in the end, this showcases that folks that wait for the third generation of a new product are likely a lot smarter than those of us (and unfortunately I am one of those sorry folks) that have to be first and on the bleeding edge.

The Energi 2K: a wall charger that is also an extra battery