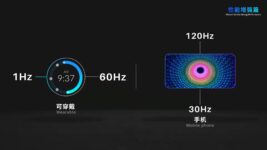 The competition of global panel industry is getting increasingly fiercer, and Chinese display enterprises are looking for chances of expanding their overseas market. However, in order to succeed, they need to have the strength powerful enough to compete with others.

On May 5, China’s OLED display manufacturer Visionox will be holding its Technology Innovation Launch Event online to release its innovative technological achievements in five sectors, covering nearly 20 innovative technologies. Among these technologies, the LTPS technology low in both cost and power consumption(EnV ALT™) made its debut with quite a low key. However, as the author sees it, it can be a very powerful Ace to assist Visionox in its global market expansion.

It is a TFT-level low-consumption and low-cost solution suitable for all models. By introducing the low-frequency LTPS technology into the original circuit architecture, it enables the display to have high refresh rate while also having the quality of low-power consumption that often comes with low refresh rate. This technology enables the display to remain flicker-free under 30Hz/1Hz low refresh rate, low grayscale, and low brightness scenarios.

From the perspective of cost, although Korean manufacturers can also produce LTPO panels with low power consumption, their cost is significantly higher.

According to people’s common sense, low power consumption cannot co-exist with low cost. So why can Visionox achieve both?

According to Visionox, it has four core patents for under-display camera technology (one-drive multi-pixel array design, small anode scheme, serpentine electrode routing, and edge-mounted circuit). Visionox is also the company with the longest development, the most patents, the fastest mass production, and the most comprehensive solutions in under-display camera technology in China.

According to the research of TrendForce, benefiting from the expansion of Chinese brands into AMOLED models, the market penetration rate of AMOLED panels for cell phones was 42% in 2021, and is expected to climb to 46% in 2022 with continuous investment in AMOLED production line expansion by various panel manufacturers. In addition to adding new solutions besides LTPO panels, Visionox’s move may open up the application of AMOLED displays in the economic market for AMOLED low-power solutions.

With the arrival of the 5G era, Visionox wants to fully release its production capacity and accelerate global market penetration with its powerful Ace: EnV ALT™.